Update: Sunday- 5:00 PM CST- The FBI just confirmed that the powdery substance found in a roll of quarters at a University of Texas dormitory was not the potentially deadly poison ricin.

Ricin found at the University of Texas!

The poison was packed in with a roll of quarters!!

If ricin was hidden in a roll of quarters,…
Wouldn’t you think that would be considered a terrorist act? 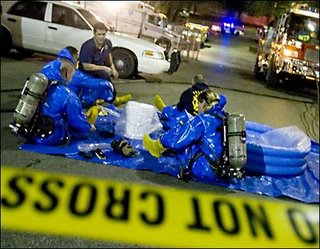 Hazardous material specialists gather outside Moore-Hill Dormitory at the University of Texas. (AP)

Here is another strange and dangerous story coming from one of America’s Heartland campuses. A University of Texas student has found ricin in a roll of quarters!

A University of Texas student found a substance that has tested positive for ricin, a potentially deadly poison, in a roll of quarters she was using to do laundry in her dormitory, officials said.

The student and her roommate were being treated for potential exposure to the poison, although neither has exhibited symptoms, said Dr. Theresa Spalding of UT Student Health Services.

The student told university police she found the chunky powder Thursday as she was doing her laundry at the Moore-Hill dormitory, Spalding said. Preliminary tests for ricin came back positive Friday.

“We were very concerned as soon as we heard about the positive testing late this evening,” Spalding said. She said the quarters had been in the students’ dorm room for several months.

Reuters now has video on the incident.

“As little as 500 micrograms of ricin could be enough to kill an adult. A 500-microgram dose of ricin would be about the size of the head of a pin.”
CDC Facts

In a roll of quarters? There is obviously much more to this story! 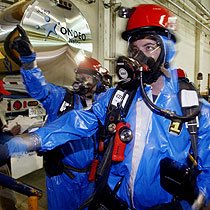 Sanitizing the dorm at the University of Texas. (Fox 6)

MSNBC has a slide show of the investigation.

Texas Rainmaker is all over the story!
The New Editor is also following the story.
Michelle Malkin is reporting on the story.
Gina Cobb notes that ricin is considered to be twice as deadly as cobra venom.
Pajamas Media is carrying the story.

Glenn Reynolds says I may be leaning towards a terrorism explanation… Yup!

“Let’s see if the MSM gives this story as much play as it gave U.S. Vice President Dick Cheney’s hunting accident.”

Hah! Not hardly!… That was a suspicious birdshot incident, this is just WMD, after all.

Not to far away (OK,… a few hours!) at another Big 12 campus Joel Henry Hinrichs III, a University of Oklahoma student, blew himself up 100 yards outside the Oklahoma-Kansas State Football Game on a Saturday night October 1, 2005.

Update: (Saturday 4PM CST) Michelle Malkin points to Junkyard Blog where there is another case of ricin in a Richmond, Virginia suburb. Here is a ridiculous line from that article:

Ricin, which has potential to be used as an agent of biological warfare, is widely available, easily produced and derived from the beans of the castor plant.

Hmm. I don’t know about ya’ll but I don’t have any castor plants on the window sills and don’t have any idea where the closest castor oil plant is from St. Louis where I can go pick up some castor bean residue.

Update 3: (9:00 PM CST) Prairie Pundit says that the substance may not be ricin after all.