Expose the Left has more video (via Michelle Malkin)

The Anchoress recalls the Wellstone rally.

Nothing is sacred. Nothing. 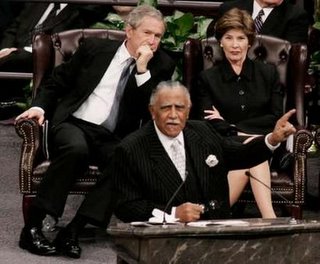 The title says Bush got jabbed… I beg to differ!
Jimmy Carter led the way today in the disgusting Bush bash at the funeral of Coretta Scott King:

Civil-rights leader the Rev. Joseph Lowery and former President Jimmy Carter cited Mrs. King’s legacy as a leader in her own right and advocate of nonviolence as they launched barbs over the Iraq war, government social policies and Bush’s domestic eavesdropping program.

Bush sat watching the long service before an audience of 10,000 including politicians, civil rights leaders and entertainers at the New Birth Missionary Baptist Church in Lithonia, and a national cable television audience.

Lowery, former head of the Southern Christian Leadership Conference, which King helped found in 1957, gave a playful reading of a poem in eulogy of Mrs. King.

“She extended Martin’s message against poverty, racism and war / She deplored the terror inflicted by our smart bombs on missions way afar,” he said.

“We know now there were no weapons of mass destruction over there / But Coretta knew and we knew that there are weapons of misdirection right down here / Millions without health insurance. Poverty abounds. For war billions more but no more for the poor.”

It’s too bad the Reverend doesn’t take the time to check out the facts before he opens his mouth, not that it would make a difference. We already know Jimmy is just Jimmy.