After a brutal week, Iraqis united on Friday: 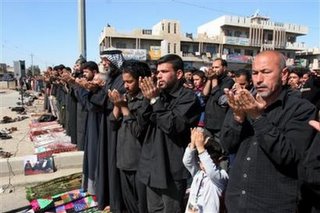 The following is a translation of a headline and news published by the Iraqi Arabic newspaper Aswataliraq on February 23rd by Iraqi American Haider Ajina.

“People of Samarah started local campaign to clean up rubble and start rebuilding the bombed Shrine, while other residence joined a demonstration calling for national unity. The crowd chanted “Not Sunni Not Shiite… one, one national unity”. The governor of Salahudien province announced that the province had received four billion Iraqi Dinars (2,800,000 USD) from the National Government & the Sunni Endowment party to help with rebuilding efforts. Local police reported that thousand of residences have voluntarily gathered at the damaged shrine to clean up debris since sun up.

“Local police further reported that thousands of local residences formed a demonstration, which headed to city hall. Demonstrators were chanting “Not Sunni, Not Shiite… one, one national unity”. The demonstration dispersed by noon with out incidents.

“The governor of Salahudien province Hamed Alqaisi announced in a press conference that clean up and repair of the shrine has indeed started this AM. Alqaisi added; “The shrine will be restored to its former glory if not even better, by loyal Iraqi hands”. As far as catching the culprits the governor said; “A large coalition of Interior ministry, Salahudien police, the Sunni Endowment party and all who have security or management responsibility of the holy shrine has been formed. This coalition has started its investigation immediately after the heinous attack and will publish its report with in a few days”.

The following is my translation of a headline and news published by the Kuwaiti Arabic news agency KUNA on February 23rd.

“Large (peaceful) demonstrations broke out again today in Basra, protesting the heinous attacks on a Shiite shrine in Samarah. Over 100,000 protesters participated chanting condemnations against the attacks and calling for self-restraint and following religious instructions (from leading religious references) for calm. Sheik Abdul Husein Almuhamdawi (a religious leader in the province) said; “Local national Shiite committees have been formed to protect local Sunni mosques from over zealous individuals”. A source in the local Basra police leadership mentioned that “Talha” mosque and two other mosques in southern Basrah were subject to light gunfire but no one was injured”.

Most of our news reports on the bombed shrine and all the damage sustained physically and emotionally. The news further reports on sectarian attacks and demonstrations. While this is true and accurate what is not being reported is the calling for calm and cooperation by all Sunni & Shiite religious leaders (except the young Alsadar who remains a thorn). The demonstrations of national unity. The mullahs in Sunni & Shiite mosques calling for support for injured brothers and sisters, national calm. They do not report on the Shiites standing guard outside of Sunni mosques in the south. Etc… There are two sides to this incident. The side of revenge, anger and the much larger side of unity and support. This bombing in Samarah has brought more unity amongst Iraqis than any other incident since the stampede on the Kahdumiah bridge (when Felujans [mostly Sunni] donated blood for the wounded in Kahdumiah [mostly Shiite] in Baghdad). Iraqi political parties, community leaders, religious leaders, political leaders all are strongly condemning this bombing and asking for national support and help for the people of Samarah. This out pouring of compassion, support and help is what is not being reported. 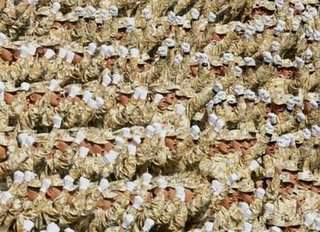 South Korean soldiers shout slogans during a farewell ceremony before their departure to Iraq, at a military unit in Kwangju, about 40km (25 miles) southeast of Seoul, February 24, 2006. About 1,800 South Korean troops will leave for Iraq to replace their colleagues operating in the northern Iraqi town of Irbil. The exact date of the troops’ departure is not announced for security reasons. (REUTERS/Kim Kyung-Hoon)

The Bulgarian Parliament has agreed to send troops back to Iraq after pulling troops in December.

The Real Ugly American says the media’s coverage is way overblown.
Kim Priestap says the people will resist Al Zarqawi.
I like Gina Cobbs take on the situation.
Neo-Neocon shares more of her thoughts on the Iraqi conflict.