Update: The Brussels Journal today defines the battle ahead.

Brave Writers and Intellectuals Make a Stand Against Islamofascism

Together facing the new totalitarianism

We, writers, journalists, intellectuals, call for resistance to religious totalitarianism and for the promotion of freedom, equal opportunity and secular values for all.

The recent events, which occurred after the publication of drawings of Muhammed in European newspapers, have revealed the necessity of the struggle for these universal values. This struggle will not be won by arms, but in the ideological field. It is not a clash of civilisations nor an antagonism of West and East that we are witnessing, but a global struggle that confronts democrats and theocrats.

Like all totalitarianisms, Islamism is nurtured by fears and frustrations. The hate preachers bet on these feelings in order to form battalions destined to impose a liberticidal and unegalitarian world. But we clearly and firmly state: nothing, not even despair, justifies the choice of obscurantism, totalitarianism and hatred. Islamism is a reactionary ideology which kills equality, freedom and secularism wherever it is present. Its success can only lead to a world of domination: man’s domination of woman, the Islamists’ domination of all the others. To counter this, we must assure universal rights to oppressed or discriminated people.

We reject « cultural relativism », which consists in accepting that men and women of Muslim culture should be deprived of the right to equality, freedom and secular values in the name of respect for cultures and traditions. We refuse to renounce our critical spirit out of fear of being accused of “Islamophobia”, an unfortunate concept which confuses criticism of Islam as a religion with stigmatisation of its believers.

We plead for the universality of freedom of expression, so that a critical spirit may be exercised on all continents, against all abuses and all dogmas.

We appeal to democrats and free spirits of all countries that our century should be one of Enlightenment, not of obscurantism.

Agora has more on the signataries.

Earlier this month, Charlie Hebdo published the Danish cartoons together with one it had commissioned for its cover showing the Prophet Muhammad muttering, “It’s hard to be loved by morons.” 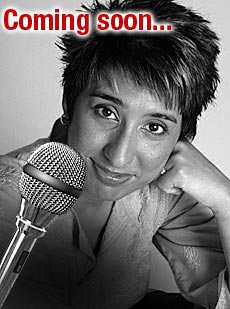 Remember me because by gods promise u n ur partner that bastard rushdie will die with lot of pain n u both will pray for death but death will not come to u so easily inshallah. n u will die soon inshallah. n ur soul will rot in hell. read this n remember every day.” – handsome_guy

Ayaan Hirsi Ali has had an entourage of security guards since she started receiving death threats in 2002. 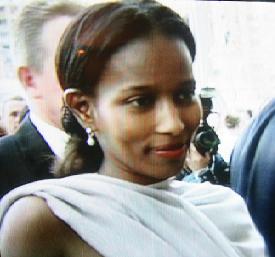 In 2004, Ayaan Hirsi Ali took her “Dutch mother” to lunch at the Dudok brasserie, near the Parliament in The Hague. As always, Hirsi Ali’s armed security detail was there. They have been her companions since she started receiving death threats in September 2002. Hirsi Ali, who was born in Somalia and has been a member of the Dutch Parliament since January 2003, had endorsed the view that Islam is a backward religion, condemned the way women live under it and said that by today’s standards, the prophet Muhammad would be considered a perverse tyrant. She had also announced that she was no longer a believing Muslim. The punishment for such apostasy is, according to strict interpretations of Islam, death. That day at the Dudok, several dozen vocational students were taking up the main restaurant, so she and her guards parked at two tables near the bar. Hirsi Ali had her back to the restaurant when one of the students, apparently a Dutch convert to Islam, tapped her on the shoulder. ”I turned around,” she recalls in her elegant English, ”and saw this sweet, young Dutch guy, about 24 years old. With freckles! And he was like, ‘Madam, I hope the mujahedeen get you and kill you.’ ” Hirsi Ali handed him her knife and told him, ”Why don’t you do it yourself?”