Anders Fogh Rasmussen , along with George W. Bush, will go down in history as the two Western Leaders who helped secure freedom and democracy in a troubled twenty first century world.

A cartoon of the Danish Leader during an anti-cartoon protest in Turkey. 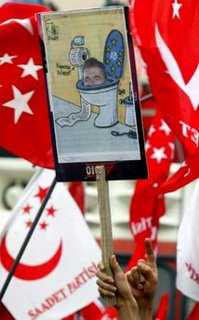 A Muslim protester holds up a placard in which Danish Prime Minister Anders Fogh Rasmussen is caricatured during a rally organised by Islamist Felicity Party in Istanbul February 19, 2006. The words read ‘Copenhagen criterions’ to refer to the European Union. Tens of thousands of protesters chanted slogans during the rally against the publication of cartoons in Danish newspapers and the European media, which Muslims say insult Islam and the Prophet Mohammad. (REUTERS/Stringer)

“People die during violent demonstrations in Pakistan, and places rarely heard of. And with typical self-centered narcissicism, in Denmark it is interpreted as a matter of Danish immigration policy and Danish integration policy. Noone even knows about these things in the streets of Pakistan – to be frank, I think this kind of criticism is beyond the pale,” says Anders Fogh Rasmussen of the domestic debate…

…”When I revisit events in my head and scrutinise the steps we’ve taken on this issue, I see no place where this administration could or should have acted differently. And regarding the matter of the proposed meeting with the ambassadors, I still think it was the right choice to not meet them.”

…”I would like to stress that Freedom of Speech stands second to none for me of all our liberties. I see it as the guarantor of all our other liberties. And I see Freedom of Speech – the right to speak truth to power – as the basic locomotive of all Western societies. It’s what makes progress possible, that norms aren’t accepted on face value. That’s why it is so essential to guard it. All our liberties are answerable to the courts, of course. I too think that there are limits to what one may lawfully say. For instance, I don’t think it’s right if you have the liberty to encourage violence and terror. And apart from that, we also have a restriction on racist or blasphemous speech, and if you feel that you’ve been so spoken to, you may take your complaint to a court of law. So it is a liberty that is limited by the courts – but – here’s the point – the limits are enforced by the courts, not the government. That’s a lesson we have to be mindful of…”

There is much, much more of this staunch leader’s interview at Agora.

Compare that interview with a previous interview before the controversy blew up and you see that Anders Fogh Rasmussen is a very principled leader.