Masked gunmen stormed into the Gaza beachfront UN club and blew up the drinking hall. It was the first such attack in Gaza on a UN target and came against a backdrop of growing unease over the upcoming elections in late January.

Militants also announced an end to a truce with Israel they had followed at the request of Abbas. Palestinian militants marked the end of the truce agreement on Sunday by firing a barrage of rockets towards southern Israel.

The tension in the Palestinian territories continues to escalate ahead of the parliamentary elections. 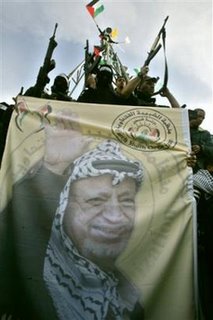 Palestinian militants of the Al-Aqsa Martyrs Brigades, hold a banner of the late Yasser Arafet during a rally marking the 41st anniversary of the foundation of Fatah, in the West Bank town of Ramallah, Sunday, Jan. 1, 2006.

Growing chaos in Gaza and Israel’s threat to prevent east Jerusalem Palestinians from voting in the disputed city have led some prominent Palestinian officials to demand a second delay in the vote, where Fatah is expected to lose significant ground to Hamas militants.(AP Photo/Muhammed Muheisen)

Fatah is now trailing significantly in the polls with the terrorist group Hamas leading by a wide margin. Hamas continues to favor Israel’s destruction.

About 50 armed Fatah gunmen took over a Palestinian office on Saturday until officials agreed to discuss their demands.

In a separate incident on Saturday, about 30 gunmen and relatives of a young policeman who had been killed in a gun battle on Thursday with a Palestinian clan stood at the Rafah border crossing with Egypt and threatened to stop Palestinian officials from using the crossing.