The outspoken Zhirinovsky, who was recently voted Russia’s sexiest politician, must think that makes him an expert on women and sex. 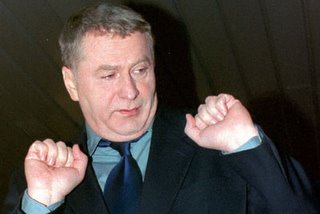 The ultra-nationalist Vladimir Zhirinovsky from Russia took offense to Condoleezza Rice’s comments on the Russia-Ukraine energy crisis earlier this month. Vlad went off on Condoleezza in a Pravda interview on Wednesday:

Condoleezza Rice, the US Secretary of State, openly criticized the Russian government in connection with the gas conflict with Ukraine. Ms. Rice used quite a trivial technique of psychological pressure, which is mostly practiced in the field of education.

“Condoleezza Rice released a coarse anti-Russian statement. This is because she is a single woman who has no children. She loses her reason because of her late single status. Nature takes it all.

“Such women are very rough. They are all workaholics, public workaholics. They can be happy only when they are talked and written about everywhere: “Oh, Condoleezza, what a remarkable woman, what a charming Afro-American lady! How well she can play the piano and speak Russian! What a courageous, tough and strong female she is!”…

…”This is really scary. Ms. Rice’s personal complexes affect the entire field of international politics. This is an irritating factor for everyone, especially for the East and the Islamic world. When they look at her, they go mad.

“Condoleezza Rice needs a company of soldiers. She needs to be taken to barracks where she would be satisfied. On the other hand, she can hardly be satisfied because of her age. This is a complex. She needs to return to her university and teach students there. She could also deal with psychological analysis.

“The true reason of Ms. Rice’s attack against Russia is very simple. Condoleezza Rice is a very cruel, offended woman who lacks men’s attention. Releasing such stupid remarks gives her the feeling of being fulfilled. This is the only way for her to attract men’s attention,” Vladimir Zhirinovsky said.

This is not the first time that Vladimir has spouted off:

Zhirinovsky has made no secret of his insanity in the past. Besides praising Hitler and encouraging the use of nuclear weapons, he has advocated Russia’s invasion and “reacquisition” of Alaska. To eradicate bird flu, he’s suggested arming every Russian and ordering them to shoot everything with feathers. Perhaps we could fit him with a Big Bird costume.

I, myself, thinks he’s smitten.

Hat Tip to Jamie Allman and The Electric Stove