Portugal voters elect a reform-minded economist as President to help boost the stagnant economy, run by socialists. Cavaco Silva is the first center-right candidate voted into office since 1974. 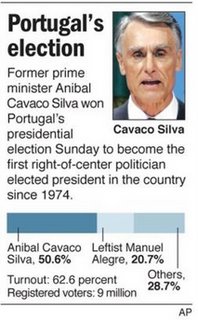 Silva becomes president of Western Europe’s poorest country and understands he has no small task ahead of him:

The politician finished well ahead of the two Socialist candidates, Manuel Alegre and former President and Prime Minister Mario Soares, who came third.

Mr Cavaco Silva is the first centre-right politician to fill the largely ceremonial post of president since Portugal’s 1974 revolution.

He told supporters after the results were announced: “The task before us is not small, the work will be long and demanding.”

Mr Cavaco Silva vowed to work with the Socialist government, saying: “I know by my own experience the value of cooperation among government bodies.”

Mr Soares – the Socialists’ official candidate – told supporters: “The results went against my expectations. I accept this defeat with a feeling of mission accomplished.”

With the economy stagnating, many of the nine million registered voters want a strong leader like Mr Cavaco Silva, an economist with an austere and some say authoritarian image, says the BBC’s Alison Roberts in Lisbon. 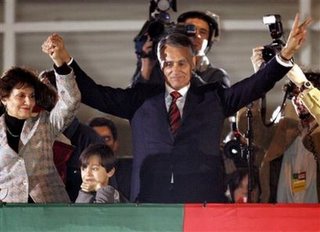 President-elect Anibal Cavaco Silva, holding hand of his wife Maria, flashes a victory sign to cheering supporters after winning Portugal’s presidential election, Sunday, Jan. 22, 2006, in Lisbon. Cavaco Silva, a reform-minded economist who has pledged to help lead the country out of a slump, collected 50.6 percent of the votes cast, according to official results. (AP Photo/Armando Franca)

Silva took 50.59 percent of the vote, more than his five socialist opponent’s vote totals combined. Silva is the first is the first president elected outside the left since a 1974 military coup toppled a repressive right-wing dictatorship which ruled Portugal for nearly 50 years.

Jim Hoft
Jim Hoft is the founder and editor of The Gateway Pundit, one of the top conservative news outlets in America. Jim was awarded the Reed Irvine Accuracy in Media Award in 2013 and is the proud recipient of the Breitbart Award for Excellence in Online Journalism from the Americans for Prosperity Foundation in May 2016.
WOW! Jill Biden's Dress Looks EXACTLY Like Hunter Biden's Crack Couch -- AND IT WAS ON THE COVER OF VOGUE!
HHS Whistleblowers Claim They Were Told to Hide Real COVID Situation Among ‘Child Migrants’
WTH? Biden's Latest Sales Pitch to Get Vaxxed: "Even if You're Fully Vaccinated - You Could Have the Delta Variant in Your System"
War Room: TGP's Jim Hoft and Steve Bannon on The Left's Attack on the Election Audits and Their Desire to Destroy Mike Lindell (VIDEO)
Minnesota Woman Beheaded in Broad Daylight on Minneapolis Street After Judge Allowed Killer Out of Jail
See more...