Palestinian voters are faced with choosing the corrupt Fatah Movement who has stolen millions from the Palestinian people, or the Radical Hamas Terrorist Organization who still insists that it will never recognize Israel. 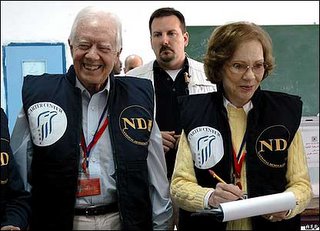 Former US President Jimmy Carter and his wife Rosalyn are leading a delegation of 80 international observers from 22 countries. (BBC) Jimmy, a strong supporter of Arafat, was greeted by angry Ethiopian protesters in November in Minnesota after he rubberstamped their unsuccessful election last May.

The terrorist group Hamas, who still insists that it will never recognize Israel, is fielding candidates for the first time:

Hamas leader Mahmoud Zahar, whose party is expected to make a strong showing among Palestinians in their first parliamentary election in a decade, on Wednesday left open the possibility of forming a coalition with the ruling Fatah Party and also the possibility of future negotiations with Israel, under certain conditions.

Zahar said his goals include reconstruction of what he claimed has been destroyed by Israeli occupation and corruption, as well as rebuilding the Palestinian infrastructure.

He said he would be open to negotiations with Israel, but only if the Israelis have something to offer and enter into talks with good will and respect for the rights of Palestinians.

“We are not going to meet them just for meeting,” Zahar told a throng of reporters after casting his own ballot. Previously, he said, many meetings have been held but “ended with nothing.”

Asked if Hamas would ever recognize Israel, Zahar replied: “Never.”

Fatah gunmen killed one of their own party leaders on Tuesday, the day before the election raising fears of violence during the vote today. 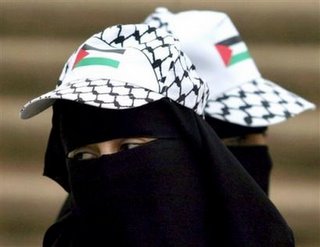 Two veiled Palestinian women wearing caps of the ruling Fatah movement, wait their turn to vote for the Palestinian parliamentary elections at a polling station in the southern of Gaza Strip town of Khan Younis, Wednesday Jan. 25, 2006. Amid tight security, Palestinians cast ballots in their first parliament election in a decade, an historic vote integrating Islamic militants into Palestinian politics and determining the future of peacemaking with Israel.(AP Photo/Khalil Hamra)

Hamas says it will not give up its arms after the vote on Wednesday:

Hamas said it plans to retain its weapons and its commitment to the destruction of Israel after Wednesday’s Palestinian Legislative Countil election, in which it slated to win seats for the first time.

“The Europeans and the Americans are telling Hamas to choose between arms and parliament. We say we will go for arms and parliament and there is no contradiction between the two of them,” said Ismail Haniyah, a senior Hamas leader in Gaza.

After casting his vote in the Gaza Strip on Wednesday morning, Hamas leader Mahmoud al-Zahar said the group “will not change a single word in its covenant” calling for the destruction of Israel.

In a press conference after his meeting with Jimmy Carter, President Abbas said in response to a question about Israeli violence against the Palestinian people, “We will surpass those events now,” adding that “the Israelis have to stop assaulting and killing Palestinians, if they want peace.”

Publius Pundit is following this first ever election with Hamas participation.

Freedom for Egyptians, who is hopeful for ppositive developments from the election, writes about how Islamists in the Middle East are using the democratic process to their advantage.