Yesterday, January 9, 2005 was the 4 year anniversary of the “No Child Left Behind Act” 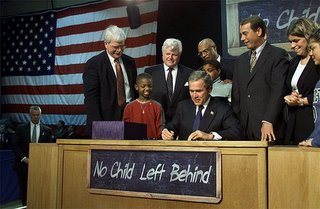 How NCLB is working after four years:

Since 2001, the Administration has increased spending on elementary and secondary education by 41 percent. Title I funding for disadvantaged students is up 45 percent, and funding for the Reading First program has quadrupled.

According to the National Assessment of Educational Progress (NAEP), the achievement of young students has risen since 2002. In 2005, America’s fourth graders posted the best reading and math scores in the test’s history. Eighth graders earned the highest math scores recorded by NAEP.

Minorities are closing the gap:

After 4 years “No Child left Behind” is facing the soft bigotry of low expectations with results.