Is Cindy Sheehan becoming the voice of the new Democratic Party? 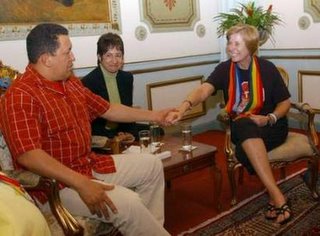 Cindy Sheehan is joined by Mary MacElveen, writing for the Venezuela News Service, in bashing former President Bill Clinton and his administration:

According to: “We Think the Price Is Worth It.” When former US Secretary of State, Madeline Albright (who served during the Clinton administration) was asked by Leslie Stahl: “We have heard that a half million children have died. I mean, that’s more children than died in Hiroshima. And, you know, is the price worth it?” This is what Madeline Albright had to say: “I think this is a very hard choice, but the price — we think the price is worth it.”

No words can adequately express my anger where a former Secretary of State would say that the murder of a half a million children is a price worth paying.

I used to hold Albright in high regard, but, after reading that, it turned my stomach. She that owes the Iraqi people an apology … anyone with small children would quickly anger upon reading this: “UN Food & Agriculture Organization (FAO) report that 567,000 Iraqi children under the age of five had died as a result of the sanctions.”

But one person is spared the wrath of this Leftist writer, the reality TV star himself, George Galloway:

As I read: The Sanctions War this quote stood out: “We call on the president of America, the vice president and the congressmen to come to Iraq and see the little children, and Tony Blair, the UK government and Kofi Annan to come and to go to the cancer ward and give us an answer…what was their crime?” -Nobel Peace Prize laureate Adolfo Perez-Esquivel of Argentina who traveled to Iraq in March (AP, March 9, 1999)

It is then I remembered George Galloway’s statement before the (United States) senate subcommittee looking into the oil for food scandal where he said: “Now, Senator, I gave my heart and soul to oppose the policy that you promoted. I gave my political life’s blood to try to stop the mass killing of Iraqis by the sanctions on Iraq which killed one million Iraqis, most of them children, most of them died before they even knew that they were Iraqis, but they died for no other reason other than that they were Iraqis with the misfortune of being born at that time.” Mr. Galloway stated this on May 17, 2005.

It’s a good thing that he still has friends on the Far Left. The “Big Brother” evictee only sold 34 tickets for his upcoming tour this month.

Cindy Sheehan is getting quite a following. Maybe, Senator Feinstein ought to be concerned?

As a side note: Code Pink was impressed with Marxist Hugo Chavez as well.

Update:
Democracy Project has had it with the Potty Mouth politics of the Left.
Gay Patriot is upset with the Leftist abuse.
Elephants in Academia doesn’t appreciate Chavez meddling in US politics (I’m sure most of South and Central America agree!)
But, I say,… Where can I sign up to help with the “Cindy for Senator” campaign?

Update 2: (7:00 PM CST) Cindy is planning a protest in April at “Camp Casey” in Texas. Hugo says he may come and pitch a tent with her! He also tried to persuade Cindy to run for president.