The following is Haider’s translation of a headline and news published by the Arabic newspaper Dar Alhayat on Wdnesday, January 18th. 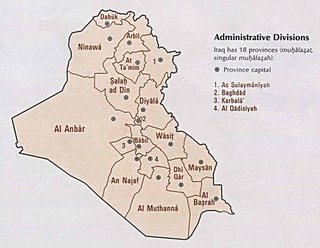 Al Anbar is a mostly Sunni Province in western Iraq. Nearly a third of US casualties occurred in Al Anbar province as of June 2005.

Dar Alhayat newspaper has learned (from Walid Alhilli) that Iraqi Prime Minster Al Jafari has agreed to replace U.S. forces spread throughout Anbar province with locally enlisted forces. This agreement was drafted in a meeting between tribal leaders, Aljaafery, the U.S. Ambassador Khalil Zad and commander of the multi national forces General George Casey. The agreement was reached in a meeting last Sunday in the province. The local tribal leaders committed to expelling the foreign fighters and isolating the local Alqaida network lead by Zarqawi.

In preparation for this local involvement local recruiting centers have been reopened and local training camps have been set up. These camps will prepare locals to take over full security responsibility in their province (as in Najaf, Karbala, Kut, parts of Baghdad etc.). These newly (U.S.) trained local units primary responsibility will be fighting, terrorists, and chasing down or chasing away-armed groups. This will be done as U.S. forces withdraw gradually.

Alhilli (a high ranking member in the leadership of the Aldaawa party the head of which is PM Aljaafery) said; this agreement resulted from requests of Anbar tribal leaders (including the Dulaimy tribe) for government, monetary, political and social aid to defy and get rid of Zarqawi’s organization. These leaders said that Alzarqwi’s organization is forcing local support with violence and most of the organization is non-Iraqis. Haithem Alalusi an official of the “Congress of the Islamic revolution” confirmed this request. Families and tribal leaders in the Alkhalediah, Alfelahat and Alkermeh areas (south of Felujeh) have formed local councils. Council members are Local Imams and educated individuals who will educate locals to reject violence and terror.

Sources close to armed Iraqi groups said that Alzarqawi’s organization is trying to gain favor with Iraqi resistance groups by shooting down three U.S. helicopters. But local fighters in Ramadi have labeled Zarqawi and his organization terrorist and have had armed clashes with them. These sources also said that the local resistance in Ramadi and the tribal leaders are trying to force Zarqawi out of Iraq and are looking for any means to get rid of Zarqawi. Some local families have asked for Zarqawi and his follower’s heads, after locals were killed in bombings while enlisting at police recruiting stations. Theses bombings have lead to armed clashes against Al Zarqawi’s group, which resulted in the death a tribal leader.

Samara is not far from all the developments in Ramadi. Samara has also formed local committees to chase and keep away foreign fighters and reestablish the local council. Albubaz family of Samara was able to kill four and chase away 11 foreign fighters in joint operation with Iraqi security and other tribes. Tribes of Samara have asked to reopen military and police recruiting centers, government offices and promised to guard the city from attacks. 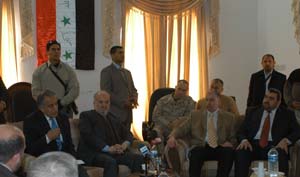 Marines.com carried a picture of the meeting of Prime Minister Al Jafari in Ramadi on January 15, 2006.

More signs of progress in Iraq. Especially in the Sunni triangle. This area is no longer a safe haven for Zarqawi and his followers nor is it an open recruiting ground any more. Sunni Arab tribes are realizing Zarqawi’s intentions are not in their best interests and that he is costing them dearly. Self-governance and self-determination away from oppression and violence is a natural state of existence and can only come when Zarqawi and his group are kicked out of the Sunni triangle and defeated. Locals in the Sunni triangle want to join the (all volunteer) Iraqi military and police to be trained (by us) and employed in providing security for their homes and streets away from the terrorist threat of Alqaida in Iraq. This is a 180-degree turn around from just 8 months to a year ago when these areas provided support for Alqaida in Iraq. Now these areas are recruiting grounds for the fight against Zarqawi and his ilk. Local tribal leaders who were enticing violence against the elected government in Iraq and our forces have now come to us and the government for help and are gradually joining the political process.

The last election showed a large turn out in the Sunni areas. For that Zarqawi launched a campaign of terror and intimidation to try to defeat democracy in Iraq. Obviously his plan backfired and is now bringing about his demise.

Al Anbar province is 110 km west of Baghdad. It has a population of 1.2 million and Ramadi is the capital. It is a Sunni stronghold.

Of the 1,630 U.S. troops who have died since the war began, (June 2005) more than 500 have lost their lives in Anbar, a higher toll than in any other area of the country, according to icasualties.org, a Web site that tracks military deaths.

Iraqi and US troops are conducting a joint operation in Al Anbar province today aimed at capturing or killing insurgents.

Update: Powerline is also carrying this story today. Bill Roggio today mentioned the meeting in Al Anbar and the latest successes over insurgents in the area.