“I admire him for his resolve against my government and its meddling. My government should not meddle anywhere.”

Cindy Sheehan continues to mourn the loss of her on has she attends the Marxist Anti-War World Social Forum in Caracas, Venezuela this week. She looks forward to meeting the Marxist Anti-Bush Chavez. 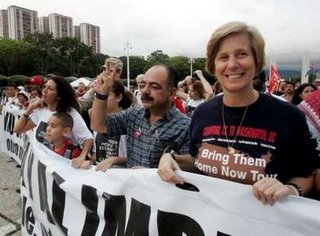 US anti-war protester Cindy Sheehan smiles for admirers in a march during the launching of the World Social Forum in Caracas 24 January 2006. Sheehan, mother of a US soldier killed in Iraq, joined more than 10,000 anti-globalization activists in Caracas, where she hailed Venezuela’s leftist President Hugo Chavez.(AFP/Juan Barreto)

The activists paraded down the avenues chanting, “Socialism, Yes! Imperialism, No!” 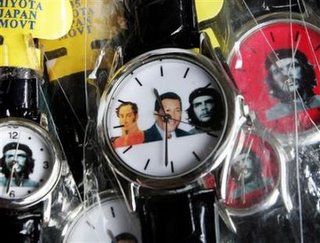 Watches with pictures of Venezuelan President Hugo Chavez and Argentine revolutionary hero Ernesto ‘Che’ Guevara are on sale outside one of the venues of the World Social Forum in Caracas, January 23, 2006. (Jorge Silva/Reuters)

Hugo Chavez is declaring Venezuela as the epicenter for world change as the weeklong World Social Forum kicks off today in Caracas:

The forum, which was set to begin Tuesday afternoon with an anti-imperialist march through Caracas, was being promoted by Venezuelan President Hugo Chavez, who has frequently clashed with the United States and accuses it of plotting to overthrow him. He is also one of the leading voices of the new left sweeping across Latin America.

Organizers said more than 60,000 people had signed up to attend and tens of thousands more were expected at the forum, about half of them from outside Venezuela.

Anne Hess, an activist from Norway, said she was attending the meeting to protest Bush and British Prime Minister Tony Blair, who led the 2003 invasion of Iraq.

“We need to stop the war in the Middle East,” she said Monday. “We need the whole world out in the streets again to stop Bush and Blair, and their crazy imperialist dreams.”

Chavez is expected to address activists on the sidelines of the conference. He has recently strengthened ties across South America as left-leaning leaders have won power in countries from Argentina to Bolivia.

“Venezuela has become an epicenter of change on the world level,” Chavez said Friday, referring to the event in a speech. “That’s why (U.S.) imperialism wants to sweep us away, of course … because they say we are a bad example. But they haven’t swept us away and they won’t.”

Cindy Sheehan is expected to speak to the revelers at the forum this week after her latest tour of Europe.

Castro held a rally of his own today in front of the American Mission in Havana, Cuba but the US had a little surprise for him! Babalu has this terrific story.

The rumor has it that Fidel may join the World Social Forum in Caracas later this week. A group from Cuba arrived for the Forum and already held a rally in Caracas earlier today.

Venezuelan News and Views and V-Crisis will no doubt be covering the forum this week.