In an effort to inform America on the treats of terrorism, Oprah yesterday invited a guest panel of experts to her show to discuss the threat of terrorism on our country.

One huge disappointment was Oprah spreading the “100,000 dead innocent Iraqi civilians” myth. She bit on this suggestion, although one guest did say he thought the number was around 25,000 which is closer to the actual number, according to most experts, with most of those innocents killed by the insurgents since the Iraq War began. 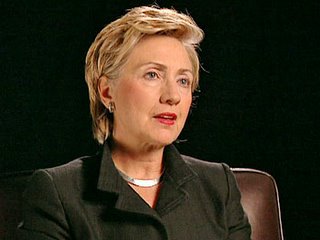 Oprah invited the Clinton’s on to share their views on terrorism. Hillary Clinton proceeded to make a broad all-encompassing attack on religion:

“Right now the greatest threat to world peace is intolerance cloaked in religion,” Senator Clinton says. “It’s people who believe that their religious views are the only right ones, and therefore, any means that is available to them—including flying planes into towers or planting bombs in subways—that somehow they are permitted to do that because they’re acting in the name of a religion. That gives them the justification to wreak havoc and violence.”

The Senator stresses that we must still continue to have open minds when it comes to our views of people around the world. “Not that we are going to give up what we believe, but in the complex world in which we live, we have to recognize that not everybody will see the world the same way.”

Despite the challenges our nation faces today, Senator Clinton believes it is an exciting time to be a woman in America. “But to those to whom much is given, much is expected,” she says. “So as American women, I think we have a special obligation to vote. Let your voice be heard. A citizen always wins because you’ve participated.”

Listening to Hillary you would think that Nuns in the Philippines are flying planes into buildings screaming “Hail Mary!” or that devotees leaving a Billy Graham revival are heading to the closest restaurant to order a non-alcoholic beverage and then set off a bomb with their booby-trapped Bible.

This is because, after all,… Conservative Christians and Jews are as much the threat as Radical Islam.

This goes hand in hand with the dreaded “Religious Right” attacks you will be hearing from the Left from now to election day.