The “Quartet” tells the terrorist group Hamas to change which was immediately rejected,
VIDEO HERE

Hamas does not want anything to do with the “Unfair Conditions” that the billion dollar donors are demanding of the terrorist group. 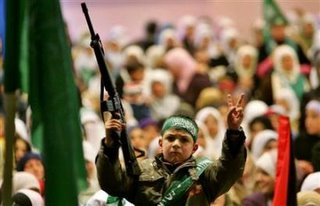 A Palestinian boy holds up a toy rifle during a rally in support of Hamas in the West Bank city of Ramallah, January 30, 2006. (Ammar Awad/Reuters)

Hamas continued to accuse the West of “blackmail” today in its demands that Hamas recognize Israel’s right to exist and continue to work on a peace plan:

The United States, United Nations, European Union and Russia (known as the Middle East quartet) warned at talks in London on Monday that payments could be slashed if the winner of last week’s general election did not radically alter its principles before entering government.

The victory of the radical Islamist movement, behind dozens of suicide attacks in a five-year uprising, has already led Israel to warn that it will have no dealings with a Palestinian Authority which includes “terrorists” and to sit on customs revenues that it should hand over.

Hamas has made clear that its embrace of democracy will not lead it to give up its “right to resist Israeli occupation”, even though it has not carried out any attacks for more than a year.

“The international aid which is offered to our people is a humanitarian need for the Palestinian people who are still living under Israeli occupation,” Ismail Haniya, who led the list of Hamas candidates in last week’s election, told AFP.

“This aid should not be linked to unfair conditions,” he added.

International donors including the UN and EU are talking tough… right now but will not cut off aid immediately:

The so-called Quartet of would-be Mideast peacemakers stopped short of issuing an outright threat to Hamas, but they said it is “inevitable” that future aid to a new Palestinian government led by the militant Islamic group “would be reviewed by donors against that government’s commitment to renounce violence, recognition of Israel.”

You know what that means. Hamas just has to wait it out a bit longer and they should be just fine.

International donors, including the EU and US, gave the Palestinians almost $1 billion in aid last year.