** GEORGE GALLOWAY PLAYS A PUSSYCAT IN CELEBRITY BIG BROTHER, VIDEO HERE **
Since he is in “lockdown” on the “Big Brother” set, he may not know about the stir he is creating on the outside, including his “pussycat” picture on the front of the Evening Standard. Goodness!

The Government Chief Whip has launched a petition calling on Celebrity Big Brother contestant George Galloway to get back to work saying his latest TV antics had made her “cringe”.

Before starting the series, Galloway said this would be a “chance to show a large and different audience what I’m really like”. 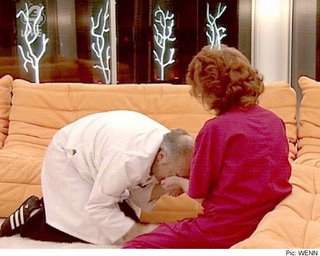 In this image made available in London by Channel 4 television, Thursday Jan. 12, 2006, independent British Member of Parliament George Galloway imitates a cat, with the aid of actress Rula Lenska, on the reality television show ‘Celebrity Big Brother’, at Elstree Studios, Borehamwood, England. Politicians from other parties have called for Galloway, 51, who founded the Respect Party after being expelled from the Labour Party for opposing the Iraq war, to be censured for his appearance on the show.(AP Photo/Channel 4, pa)

THE credibility of George Galloway was looking increasingly strained yesterday after the controversial MP, a contestant in the cult reality show Celebrity Big Brother, was seen by millions of TV viewers pretending to be a cat.

And accusations that Mr Galloway has abandoned his constituents to appear on national television looked set to continue last night after he avoided immediate eviction from the programme’s set following the first of the show’s votes to see which contestants remain.

The glamour model Jodie Marsh, who has complained of being bullied by her fellow housemates during her time on the show, was the first to be voted out of the house. She had been up against Mr Galloway and the cross-dressing singer Pete Burns in the public vote.

As house contestants bedded down to another night inside the “house”, speculation over Mr Galloway’s political future was intensifying after a bizarre episode in which the arch critic of the Iraq war crouched on all fours and pretended to be a cat at the feet of actress Rula Lenska.

The Dundee-born Respect MP for Bethnal Green and Bow pretended to drink from Lenska’s cupped hands and was stroked behind the ears by the actress.

Mr Galloway’s animal impression came after 57-year-old Lenska was asked by the unseen voice of Big Brother to test whether humans could communicate with animals. In another task set by producers, he helped Lenska try to read the mind of a goldfish.

Tonight’s episode has George all dressed up as a little devil? 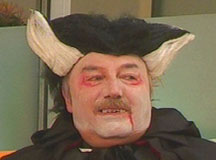 George Galloway faced immediate backlash from his constituents for being on the reality show:

Mr Galloway, 51, faced an immediate backlash from residents of his Bethnal Green and Bow constituency, east London, who voted for him last May.

He further angered conservative Muslims, who make up the bulk of his support, when he told his housemates, including glamour models, entertainers and minor pop stars, that his favourite pursuits were sex and sunbathing.

Pajamas Media is up on the story.
The Daily Ablution has a video-parody.
All Things Beautiful has a nice shot of George in pink polka dot sheets.