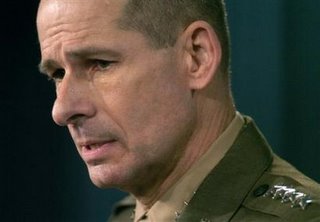 Chairman of the Joint Chiefs of Staff, Gen. Peter Pace takes questions from reporters at a press briefing on Thursday, Jan. 5, 2006 at the Pentagon. (AP Photo/Kevin Wolf)

This was long overdue! I’m not like the New York Times. I’m all for positive “propaganda” or at least a little positive fluff piece once in awhile. It happens all the time with Bill Clinton . I say let’s hear more positive news here in the States or at least a bit more truth. I still haven’t seen a news service yet correct any of the exaggerated claims by the not so hawkish John Murtha. Not once! And, he has been way off on his claims! General Pace has heard an earful but he may have drawn the line today…

Gen. Peter Pace, chairman of the Joint Chiefs of Staff, was asked at a Pentagon news conference to comment on remarks by Rep. John Murtha, D-Pa., a Marine Corps veteran who has become a leading voice in Congress advocating an early withdrawal of U.S. forces from Iraq (as he did during the Somalia Conflict). Murtha told ABC News this week that if he were eligible to join the military he would not, nor would he expect others to join.

Pace called the news conference to discuss his weeklong trip to Iraq and elsewhere in the Persian Gulf region. He said he found good troop morale and a “quiet confidence” that U.S. efforts in Iraq were on the right track.

In commenting on Murtha’s remarks, Pace praised the congressman’s record but criticized his remarks.

But, in a statement published later on Thursday, Representative Murtha would have none of it! He said that the military is not recognizing its own mistakes:

“They’re trying to direct attention away from their problems,” said Murtha, D-Pa., a decorated Marine Corps veteran who has become a leading voice in Congress advocating an early withdrawal of U.S. forces from Iraq.

Gen. Peter Pace, chairman of the Joint Chiefs of Staff, said during a news conference Thursday that Murtha’s remarks about Iraq are damaging to troop morale and to the Army’s efforts to bring up recruitment numbers. Pace, the nation’s top general, was asked specifically about an ABC News interview this week in which Murtha, 73, said if he were eligible to join the military today he would not join, nor would he expect others to join.

In a statement released Thursday, Murtha said: “The military had no problem recruiting directly after 9/11 because everyone understood that we had been attacked. But now the military’s ability to attract recruits is being hampered by the prospect of prolonged, extended and repeated deployments, inadequate equipment, shortened home stays, the lack of any connection between Iraq and the brutal attacks of 9/11, and ? most importantly ? the administration’s constantly changing, undefined, open-ended military mission in Iraq.”

Murtha said he’s spoken with military leaders and “they’re frustrated by their mission.”

Speaking before a town hall meeting on Iraq in Arlington, Va., hosted by Rep. Jim Moran, D-Va., Murtha said Pace called him to discuss the war.

“Peter Pace told me this last night: They know militarily they can’t win this,” Murtha said.

Saddam Hussein from his jail cell earlier this week echoed the comments of Representative Murtha. Saddam agreed that the War in Iraq could not be won.