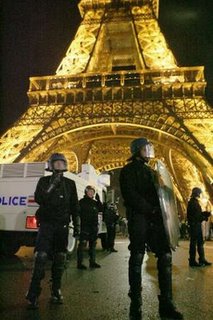 Riot policemen protect themselves from bottle-throwing at the bottom of the Eiffel tower during clashes following new year celebrations in Paris January 1, 2006. (REUTERS/Charles Platiau)

France had a difficult time in 2005. Jacques Chirac has seen his popularity sink with only 1% of voters wishing he would run for a third term:

Voter fears about globalisation, competition from eastern Europe and Turkey’s EU membership bid all revealed France as a country turned in on itself, having lost its self-confidence.

Additionally, the immediate outlook for the French economy is bleak, despite early signs of a recovery, with almost 10 percent unemployment and public overspending cited as key problems in a recent OECD report.

France was fired up for 2006. A record number of cars were set ablaze to bring in the New Year. 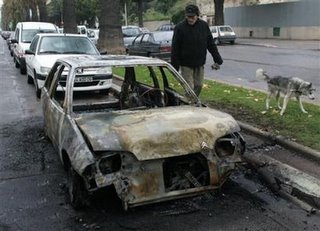 A man looks at a car burnt out car in Nice, southern France, Sunday, Jan. 1, 2006. Rowdy revelers in France torched 425 vehicles overnight in scattered New Year’s Eve unrest that has become an annual problem in troubled neighborhoods, the national police chief said Sunday. Last year, 333 cars were burned. Police Chief Michel Gaudin also said there were no major clashes this year between youths and police overnight, as had been feared. (AP Photo/Lionel Cironneau)

French officials breathed a sigh of relief after the record destruction from last night:

“Some people were worried that the period of urban violence” would be renewed during New Year’s festivities, Gaudin told reporters. “I think, happily, that it wasn’t the case.”

The police took 362 people into custody, up from 272 last year. Among the police, 27 officers were injured on the job – 15 of them hurt during what police described as a minor scuffle near the Eiffel Tower in Paris.

A state of emergency imposed during the rioting is still in effect, and 25,000 police were on alert for the holiday.

France’s opposition Socialists accused the conservative government of trying to put a positive spin on the night’s events, pointing out that this New Year’s Eve was the most destructive ever in terms of damage to cars, and the most widespread.

In the nearby Var department of southern France, youths also threw rocks at firefighters in a troubled neighborhood of La-Seine-sur-Mer, the local authorities said.

Outside Paris in the suburb of Argenteuil, a small fire was reported at a cultural center.

No Pasaran notes that this was a “typical” New Year’s Eve.