The protest against the government near St. Mickael Church in Addis Abada,
Amateur video of the protest HERE
You can see the hundreds at the protesters turn to their right as they hear shots go off in the distance. (More video at Nazret.com)

Anti-government protesters were fired upon during the annual Arc of the Covenant Proscession in Addis Abada, Ethiopia today. At least one person was killed. Several protests were held on the Feast of the Epiphany today in the thiopian capital. 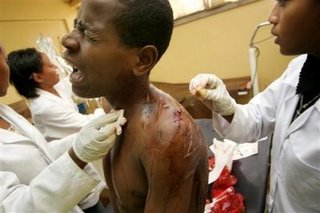 Nurses clean a bullet hole in the neck of Wubishet Solomon, 16, in a hospital in Addis Ababa, Ethiopia, Friday, Jan. 20, 2006. Protesters threw stones and police responded with gunfire Friday in Ethiopia’s capital, as annual religious processions were turned into political protests for a second day and at least 10 people suffered gunshot wounds. (AP Photo/Boris Heger)

At least one person was killed as violent protests erupted at an Ethiopian concert:

At least one person has been killed and 22 wounded after violence broke out at an Ethiopian Christian festival.
Some of the tens of thousands of people started chanting opposition slogans and throwing stones, police say. They responded with live bullets.

There been several violent opposition protests in the capital, Addis Ababa, since last May’s disputed elections.

The Ethiopian officials said that the protesters were throwing stones before the violence erupted:

Protesters threw stones and police responded with gunfire Friday in Ethiopia’s capital as annual religious processions were turned into political protests for a second day and at least 10 people suffered gunshot wounds.

Demonstrations were reported in several neighborhoods across Addis Ababa, and riot police were driving through the city. Some of the police trucks appeared to be carrying people wounded from the clashes, though their destination was not immediately clear.

Doctors at the main Menelik Hospital said they were treating at least 10 people with gunshot wounds, two of whom were in surgery. Other hospitals also reported receiving wounded people, but no details were immediately available.

The protesters were shouting slogans denouncing the head of the Ethiopian Orthodox Church, who was leading the religious observations. He has been criticized by opposition supporters for being too close to Ethiopia’s ruling party.

Traditionally, tens of thousands of members of the Ethiopian Orthodox Church march through the streets carrying replicas of the Arc of the Covenant, which they believe is kept safe in northern Ethiopia. 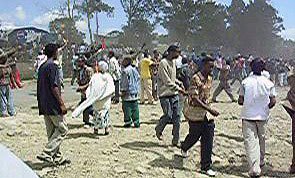 Prostesters scattered after the Meles Regime again started firing on the crowd.

The gunfire was coming from the British Embassy district:

The wounded, most of them with bullet injuries, included three men who were shot in the abdomen, chest and pelvis respectively. The men were in critical condition and undergoing emergency surgery at the Menelik hospital in Addis Ababa, doctors said.

Among the others wounded, two were women and several had been beaten with police truncheons or hit by rocks apparently thrown by demonstrators who joined up with religious processions around the city, chanting anti-government slogans and throwing stones at police, they said.

Blogger Things We Should Have Written Down witnessed the protest today.
Weichegud ET Politics is keeping up with this latest tragedy from Addis Abada.