Cindy and Hugo join in protest.
A tender moment… 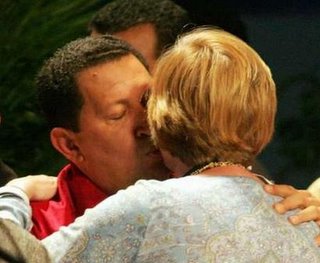 After nearly all of the Hugo bobble-head dolls, the Castro posters, and the hammer and sickle banners were sold by capitalists on the streets in Caracas, Hugo Chavez finally joined Cindy Sheehan on stage at the World Social Forum. 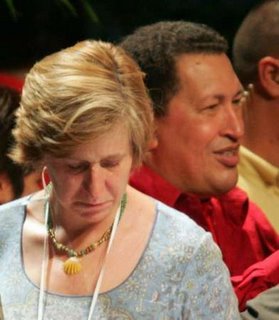 U.S. peace activist Cindy Sheehan (L) stands next to Venezuelan President Hugo Chavez during a meeting with World Social Forum Organizations in Caracas, Venezuela January 27, 2006. The sixth world forum, an event that began in Port Alegre in Brazil, has registered more than 67,000 participants and starts with a march against imperialism and war that will likely focus on U.S. President George W. Bush and the conflict in Iraq. (REUTERS/Howard Yanes)

In his speech, Hugo promised to jail all US spies in the country that was once Venezueala:

Chavez focused his speech to thousands of activists on summoning a global “battle” to resist what he termed U.S. imperialism.

The latest accusations have brought new tension to an already rocky relationship between Washington and Chavez’s government.

In his speech at a Caracas coliseum, Chavez called for activists to form “a great international anti-imperialist front to do battle in the entire world.”

Chavez also claimed that the US wants to brand Venezuela as a sponsor of terror. There is credible evidence that the Chavez government has a long history of supporting FARC rebels in remote areas of Colombia, including video evidence. 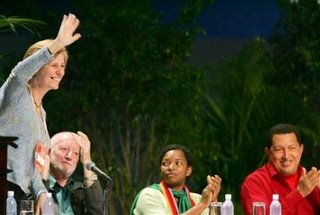 A. M. Mora y Leon notes how the Chavez factor is backfiring in Peru.

Yesterday, Cindy warned Senator Feinstein to filibuster Alito or she will run against her. Feinstein later announced she will support a filibuster on Judge Alito.

Update: (7:00 PM CST) Bring it on! Cindy Sheehan said again today that she is considering running against Senator Feiinstein in the primary in June. Cindy is going to talk with her adult children first. Republicans can only hope.