To Hugo’s delight, The Marxist’s set up shop in Caracas this week. 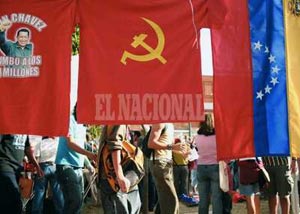 The flags of the delegates at the World Social Forum in Caracas, Venezuela this week. The media is mostly shying away from the “M” word this week despite the hammer and sickle banners waving from the rafters.

Cindy shares her little nuggets of wisdom on the “desert sands and sewers” at the World Social Forum in Caracas, Venezuela today:

Our soldiers are taught that “Hajis,” the brown skinned people of Iraq who clean their toilets, showers, and wash their clothes are less than people…which enables them to be killed more easily. The dehumanization of the Iraqi people is also dehumanizing our soldiers. Our children.

A new world is necessary and it can only be possible if we decrease our dependency on oil and use some of the money that we are pouring into the desert sands and sewers of Iraq to expand research on renewable energy sources and expound and promote the renewable sources we already have such as bio-diesel.

I have talked to many citizens of Venezuela who are understandably nervous about a U.S. invasion and they know that it is not about the idea that President Chavez is a “dictator” which he is not, he is a democratically elected leader who is very popular in his country. The people of Venezuela are very savvy and they know that if the U.S. invades their country that it won’t be because we are spreading “freedom and democracy” to them. They know they already have it.

We have to reach out to fellow members of the human race all over the world to forge the bonds that are crucial to protecting innocent members of humankind who are impoverished or killed by our government and corporatism that has gone wild and is largely unchecked.

Peace and justice are intimately connected and the world can’t have one without the other. True and lasting peace can only occur when we the people force out leadership that is dependent on the war machine for their jobs and for their lives and demand justice for the crimes against humanity that are perpetrated on the world on a daily basis by such “leaders.”

The Capitalists are making a killing at the Marxist festival. 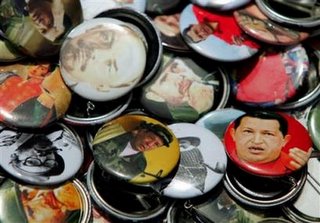 Pins with the image of Soviet leader Vladimir Lenin, Manuel Marulanda, the ‘commandante’ of the Revolutionary Armed Forces of Colombia, FARC and Venezuelan President Hugo Chavez are seen on the ground at a street market during the 6th World Social Forum in Caracas, Venezuela, Thursday, Jan. 26, 2006. In an ironic twist, delegates protesting the evils of capitalism at the World Social Forum are digging into their pockets to buy T-shirts embossed with the image of Argentine revolutionary hero Ernesto ‘Che’ Guevara and talking dolls of Venezuelan President Hugo Chavez. (AP Photo/Fernando Llano)

American Thinker reports that the people in Venezuela are getting an earful of Cindy already.