The Conservatives in Canada are looking for a win in tonight’s election. 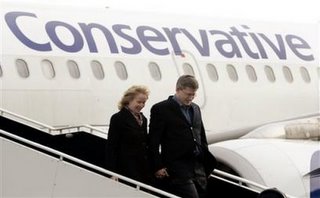 Tonight may be the end of Paul Martin era as Canadian Prime Minister. Voters are expected to elect in the Conservatives led by Stephen Harper. But, that may be only the start of the problems for Canadian liberals:

Exile and excommunication will be followed in some cases by subpoenas as a Conservative government, with full Bloc Quebecois and NDP support, opens up a hundred sealed government accounts, everything from the $2-billion gun registry to off-the-books foundations the Liberals set up, to the wheat board, which has been exempt from access-to-information requests.

For the Liberal party itself, an era of debt (more than $30-million in bank loans, according to Elections Canada), and fundraising hobbled by a loss of power and continuing audits and investigations.

But, Paul Martin still has friends at the liberal Toronto Star who endorsed him as their candidate last week.

Online sportsbook, PinnacleSports.com believes that the electorate is certain to punish the scandal-ridden Liberals at the polls and lists the over/under on seats won by Paul Martin’s party at a mere 77.5 seats. The online sportsbook believes the Conservatives are likely to gain the most from the public disdain of the Liberals, listing the total number of seats won by the Stephen Harper-led party at 146 seats in the House of Commons.

Small Dead Animals and Western Standard are two great Canadian blogs to keep an eye on for the action tonight.

Captain’s Quarters, who did so much to publicize the Liberal Party scandal, is going to live blog the election tonight.

Michelle Malkin has a roundup on the Canadian election today.

Daniel Holt at Publius Pundit is following the results from this “Maple Revolution.”

Oh, and across the pond,… Conservatives in Portugal voted out the socialists in their election today.

Update: (Midnight CST) The reults are in and it is official that Harper and Tories win in Canada. Martin called in to congratulate Harper already this evening.