The comments by the AARP Image Award Winner and UNICEF Spokesman Harry Belafonte this weekend calling President Bush “the greatest terrorist of the world” while praising the Marxist Hugo Chavez of Venezuela should come as no surprise. This behavior from black democratic leaders has been going on for some time now.

It is no secret that Hugo Chavez is a close friend with Fidel Castro or that he is a student of Marxism. Here are excerpts from his talk late last year at the World Festival of Youth and Students:

I was remembering Karl Marx and Rosa Luxemburg and the phrase that each one of them, in their particular time and context put forward; the dilemma “socialism or barbarism”. Marx, the original author of this phrase, and of all the dilemmas contained in it, put forward that phrase looking towards a future horizon… Either we really change the social and economic order, we give real form, viability and outlet for socialism, we say now we must have a new, renovated socialism of the 21st century, or we decide that life finishes on this planet. We no longer have the long time that Karl Marx had, or any other fighter of that era.

What may be surprising, though, is that he is gaining some major fans here in the US for his economic and social policies. And, the black leaders from the democratic party are becoming especially good at propping up Marxist Dictators and praising Marxist policy. 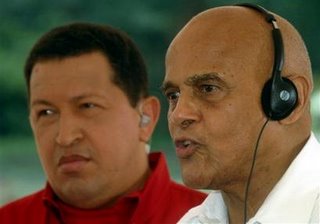 At the Millions More March on October 15, 2005, in Washington DC, Jesse Jackson, Al Sharpton, Malik Zulu Shabazz and Louis Farrakhan riled up the audience with an afternoon of glorifying Marxist Policy and Marxist Leaders while pressing for a “regime change” in Washington:

Farrakhan, like Castro and Chavez, knows how to give a long-winded speech. He just got through urging blacks to take up Castro on his offers.

Farrakhan talked about Mao Tse Tung and what a hero he was, taking the opium addicts and making them upstanding citizens. (I think this could also be called the slave labor camp solution. How many millions did that man kill, anyway?)

Farrakhan urged his followers to form a Ministry of Agriculture where the black farmers on indian land could sell their goods to the black city folk(?)

Jesse Jackson was flown to Venezuela in August in Hugo’s private jet where he praised the Marxist leader. 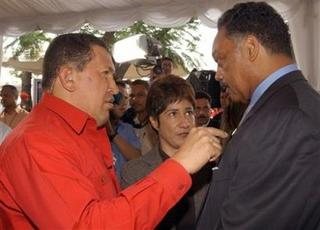 Venezuelan President Hugo Chavez, left, speaks with U.S. Rev. Jesse Jackson during Chavez’s radio show ‘Hello President’ at a military hospital in Caracas, Venezuela, Sunday, Aug. 28, 2005. Jackson offered his support for Venezuelan leader Hugo Chavez, saying a recent call for his assassination was a criminal act and that the United States and Venezuela should work out their differences through diplomacy. (AP)

The Million More Movement in October also brought out more than just the Marxists. There were the Jew-Hating Black Leaders who shared the pulpit at the event as well:

The night before the rally, however, several speakers made divisive comments at a Million More Movement event at Scripture Cathedral Church in Washington, D.C. New Black Panther Party leader, Malik Zulu Shabazz, promoted a new book on Jewish conspiracies, The Synagogue of Satan, for which he wrote the foreword. He also said that instead of seeing black mothers crying and carrying their own caskets, “I want to see some police mammas crying.”

Michael Muhammad, National Youth Minister to Farrakhan, claimed that “The white man is the devil.” Another speaker, Warrior Woman, of the Red Indian Dakota Nation, said foreign countries don’t hate the United States, but rather “they hate imperialism, they hate Zionism.”

Fortunately, Americans do have outstanding minority choices outside of these Chavez and Mao lovers. Condoleezza Rice, Lynn Swann, La Shawn Barber and Michael Steele bring a fresh and positive alternative to the American political conversation without all of the Marxist chatter.