Three people tested positive for bird flu today in Ankara!
The spread of a lethal strain of bird flu over the past two years as of January 8, 2006: 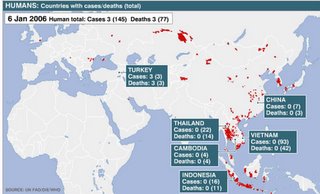 Three people tested positive for the deadly strain of bird flu in Ankara, the capital of Turkey, it was announced today:

The first case of the virus jumping from birds to humans outside China and southeast Asia occurred last week in rural eastern Turkey, where three children from the same family died after contracting the highly potent H5N1 strain.

As doctors confirmed that two children and a 60-year-old man were being treated in Ankara for the virus, Russia raised fears of the disease impacting Turkey’s economy by warning its citizens against visiting the popular holiday destination.

Doctors said the infected children, aged 5 and 2, came from Beypazari west of Ankara and had caught the virus after contact with dead wild birds. Their parents tested negative.

Ankara is about 400 km (250 miles) east of Istanbul, Turkey’s densely populated commercial and tourism hub, and from the continent of Europe. Officials said the culling of birds had begun in the Ankara districts hit by bird flu.

Panic spreads as three new cases of bird flu spread westward to the Turkish Capital of Ankara. Bird flu is knocking on Europe’s door. Cases of bird flu have already been detected in eastern Europe in birds.

(click to enlarge table)
From the US State Department, a listing of the cases of bird flu from the World Health Organization through Thursday, January 5, 2006. Since that time another child has died from bird flu in eastern Turkey. 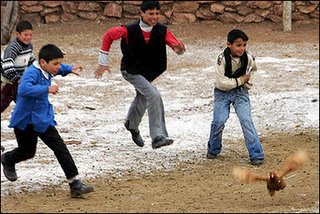 Children run after a chicken to help the disinfection crews in Dogubeyazit, near the eastern Turkish city of Agri. Turkish authorities scrambled to tackle an outbreak of bird flu at the edge of Europe after tests confirmed its deadliest strain in three people, including two children who died this week.(AFP/Mustafa Ozer)

The Kocyigit siblings lived in Dogubayazit, a remote town near Turkey’s borders with Iran and Armenia.

Turkish authorities originally said that Mehmet Ali, who died on 1 January, had succumbed to pneumonia.

However, the cause was subsequently confirmed as the deadly H5N1 strain of bird flu.

Fatma’s doctor said she had been in a critical condition since 4 January.

Both Mehmet Ali and his sister had suffered from stubborn fevers and bleeding throats and had been put on respirators.

Two other members of the Kocyigit family are among seven other people currently being treated in Van for symptoms similar to bird flu. Van lies 800 km east of the Turkish capital Ankara.

Cases of bird flu were also detected in poultry in Istanbul confirming the westward movement of the virus.

Update: (Monday AM) Five new cases of human bird flu were announced in Turkey on Monday bringing the country’s total up to 15.