On Monday January 16, 2006 at a Dr. Martin Luther King Jr. Memorial Service at the Canaan Baptist Church of Christ in Harlem, Hillary Clinton launched into an impassioned attack on the Bush administration. 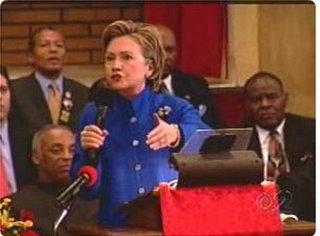 “We have a culture of corruption, we have cronyism, we have incompetence. I predict to you that this administration will go down on history as one of the worst that has ever governed out country.”

The Bush Administration has a tall task ahead of it if it wants to catch the previous Administration in indictments (1 indictment of VP Assistant, Scooter Libby), convictions (0), and imprisonments(0).

For the sake of assisting the Former First Lady with her memory, here is a list of blemishes from the Clinton Culture of Corruption Years:

The Bush Administration has quite a bit of catching up to do!

The New York Times notices that the Bush Administration is “firing back” at Mrs. Clinton after her disgusting remarks on MLK Day. They seem surprised that the Administration may be upset with her outlandish remarks.

Update: (Monday AM) Opinion Journal has an exceptional piece on Hillary’s latest behavior and the Condi threat. Here is one paragraph that stuck out:

This is why so many Republicans (including Laura Bush) now salivate at the thought of a Rice presidential bid. No other potential Republican candidate could–to borrow an old Marxist phrase–better “heighten the contradictions” of modern liberalism and Democratic power than Ms. Rice. The more ugly her persecution by the civil rights establishment and the left, the more she would give liberalism the look of communism in its last days–an ideology long since hollowed of its idealism and left with nothing save its meanness and repressiveness. Who can say what Ms. Rice will do. But history is calling her, or someone like her. She is the object of a deep longing in America for race to be finally handled, not by political idealisms, but by the classic principles of freedom and fairness.

And, in a new Right-of-Center Blogger poll today guess who comes out on top as the choice for ’08?