The Prime Minister’s has suffered lower body paralysis and is now unconscious. Sharon suffered a massive stroke Wednesday and cerebral hemorrhaging, or bleeding in his brain.
He is now undergoing an emergency operation.

The Prime Minister has been moved into surgery:

Israeli Prime Minister Ariel Sharon suffered a “significant” stroke Wednesday, a hospital official said, after Sharon was taken to the hospital from his ranch in the Negev desert. Dr. Shlomo Mor-Yosef said Sharon is under general anesthetic and is receiving breathing assistance as his condition is assessed. Cabinet Secretary Yisrael Maimon said Sharon’s authorities have been transferred to his vice premier, Olmert.

The doctors now say that he has suffered paralysis in his lower body and explained that as the reason he was carried into the hospital. 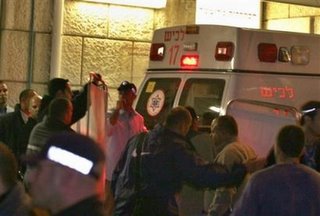 Hospital personnel cover the entry of the emergency room with screens as Prime Minister Ariel Sharon arrives in an ambulance to the Hadassah hospital in Jerusalem Wednesday Jan. 4, 2006. Sharon was rushed to a hospital late Wednesday, his office said, after feeling unwell, less than three weeks after suffering a mild stroke and just hours before he was to undergo a heart procedure. Israeli media reported that he apparently suffered another stroke or possibly a heart ailment, complaining of pressure or pain in his chest.(AP Photo/Oede Balilty)

The BBC is reporting the stroke is serious:

He was said to be fully conscious and to be accompanied by his own doctor to Jerusalem’s Hadassah hospital.

The Israeli leader’s powers have been transferred to his deputy Ehud Olmert.

Mr Sharon suffered a minor stroke on 18 December which doctors said could have been the result of a blood clot caused by the hole in the heart.

His doctors said he recovered fully then but required minor surgery for the heart problem. 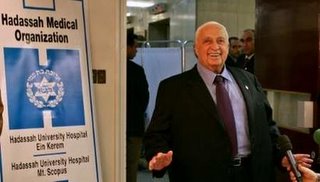 Israeli Prime Minister Ariel Sharon addresses the media upon his discharge from Hadassah-University Hospital in Jerusalem’s Ein Kerem district in this December 20, 2005 file photo. Sharon was rushed to hospital on Wednesday ahead of a scheduled heart procedure, after complaining that he felt unwell, senior Israeli political sources said. Photo taken December 20, 2005. (REUTERS/Oleg Popov)

Arutz-Sheva is reporting that he is in operation:

Physicians said there was a blood loss in his brain. The Prime Minister is on a respirator and has been anesthetized after having arrived at the hospital fully conscious.

Finance Minister Ehud Olmert. Israel Radio noted that the Prime Minister’s physicians have not tried to hide his medical condition, which is considered very serious.

The operation could take several hours and “is not simple” doctors told Israel Radio.

(At 4:45 CST) Via the Washington Post– Dr. Shmuel Shapira of Hadassah Hospital told Channel 10 TV that Sharon was taken to an operating room to drain the blood after suffering what he termed a “massive stroke.”

All Things Beautiful has a wonderful roundup and updates on Ariel Sharon’s condition.

The Political Pit Bull is liveblogging the story.