Ayman al-Zawahiri, al-Qaida’s No 2 leader, may have been among victims of a US strike on a Pakistani village which killed 18 people, ABC television reports citing Pakistan military sources.

The sources said five of those killed in Friday’s raid were “high level al-Qaida figures” whose bodies are undergoing forensic tests for identification, ABC reported.

They said Osama bin Ladin’s deputy, who has been known to stay at houses in the village, may have been one of the victims.

The Nation has an interesting report on the story:

The incident happened when a village close to the Pak-Afghan border was mysteriously attacked with rockets and missiles. Tribesmen at the joint funeral of the victims said that several gunship US helicopters took part in the well-planned operation

The aged Bakht Pur Jan, owner of one house, was killed along with 13 of his family members. Tribesmen said that a number of bodies had been airlifted from the area while a few persons were also detained and shifted to unknown place.
Maulvi Faqir Muhammad, a local religious figure, who was accused of providing shelter to alleged militants, also attended the funeral besides elders from the area. In May 2005, operations were conducted in Mamund tehsil for nabbing Maulvi Faqir Muhammad but he is still at large. 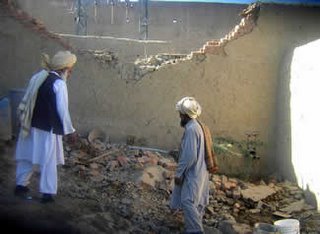 One of three buildings destroyed in the attacks is pictured here from the Daily Times.

An unmanned predator drone was seen in the area according to eyewitnesses:

The attack took place early this morning Pakistan time in a small village a few miles from the border with Afghanistan.

Villagers described seeing an unmanned plane circling the area for the last few days and then bombs falling in the early morning darkness.

Eighteen people were killed, according to the villagers who said women and children were among the fatalities.

But Pakistani officials tell ABC News that five of those killed were high-level al Qaeda figures, and their bodies are now undergoing forensic tests for positive identification.

Officials say Zawahiri was known to have used safe houses in this area last winter and was believed to be in the area again this winter. 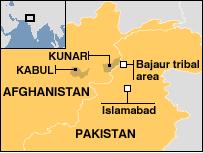 Al Zawahiri had been seen in the area and this town, previously.