Lebanon’s al-Manar Television, run by the pro-Iranian Hezbollah terrorist group, announced today that President Ahmadinejad canceled his trip to Iran’s southern city of Ahvaz on Monday after a security tip warning him Arab dissidents planned to assassinate him with a series of bombings, World Net Daily reported. 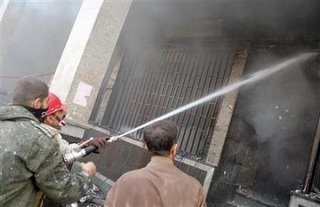 Iranian firemen work at the scene of a bomb blast in the mainly Arab southern city of Ahvaz, January 24, 2006. (IRNA/Reuters)

Two separate bomb blasts went off in the restive southern city of Ahwaz on Tuesday at the time when President Ahmadinejad was expected to give a speech:

The first bomb went off at 9:30 a.m. at Saman Bank and the second 30 minutes later at the government office for natural resources.

A series of deadly bombs went off in Ahwaz last year, and the government accused Britain of provoking the attacks. Foreign Minister Manouchehr Mottaki said in October that Iran had proof of British involvement.

Mostafa Pourmohammadi, the interior minister, said the bombings on Tuesday were motivated by foreigners. Mr. Ahmadinejad ordered the Intelligence and Foreign Ministries to investigate “the role of foreign hands” in the bombings, the ISNA student news agency reported.

“The president has ordered a prompt and firm probe into today’s blast and the terrorists who executed it,” a government spokesman, Gholam Hossein Elham, was quoted as saying.

“Iran has always been victimized by terrorism, and these blind blasts show the continuity of brutal acts against Iran by international terrorists,” he added.

The Iranian government blamed foreigners(?) for the attacks in the southern Arab community just as they had done after deadly blasts in October :

Iran on Tuesday accused “foreign hands” of being behind two bomb explosions earlier in the day in the southwestern city of Ahvaz, the official IRNA news agency reported.

“The explosions are in line with the blind moves orchestrated from beyond the borders. Since the incident occurred, enemy mouthpieces have become active and it is clear they have been expecting such an event,” Interior Minister Mostafa Pourmohammadi was quoted as saying.

Khuzestan accounts for almost 90 percent of Iran’s nearly 132 billion barrels of proven oil reserve and most of the country’s two million ethnic Arabs live in the province plagued by tension between local government and Arab residents.

Tuesday’s explosions are the third since last June in Ahvaz.

Bombings have been rare in Iran since the war with Iraq but on June 12, 2005 eight people were killed in Ahwaz when five bombs exploded and later in the day a bomb went off in the capital of Tehran.

On October 15, 2005 two consecutive bomb blasts in a computer shopping mall in Ahwaz killed six and wounded more than 50. The Iranian government blamed the “occupying” forces in Iraq for being behind that attack.

Update: (Wednesday, 1-25-06 AM) Iran’s president today blamed “the occupiers of Iraq” (The US and Britain) for the two bombings that killed nine people in the southwestern city of Ahvaz. The foreign minister said the bombers were supported by the British military.