With a busy year ahead, Condoleezza Rice enjoys nearly a two-thirds approval rating. 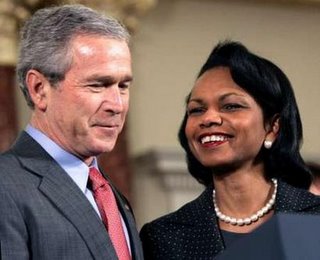 After her first year as US Secretary of State, Condoleezza Rice is gaining rave reviews from the press and public opinion polls:

Opinion polls show more than two-thirds of Americans think that she is doing a good job.

Her achievements include brokering a deal allowing Palestinians access in and out of Gaza, and helping persuade Syria to leave Lebanon…

…There is no doubt that Ms Rice’s appointment has reinvigorated the influence and importance of the state department, after years of losing out to a more powerful Pentagon.

…Ms Rice, like her president, makes no apologies but justifies the Iraq invasion in the context of spreading democracy and freedom. That goal, though, has still to take root (?).

A Pew Research survey in October found that 60 per cent of respondents held either a very favorable or mostly favorable view of her. Only 25 per cent had a very or mostly unfavorable view – numbers others in the Administration can only envy.

However, not everyone is pleased with Condi. Fidel Castro lashed out at Condi, calling her mad and using a used a “vulgar epithet” to describe her special commission on Cuba’s future transition to democracy.

Robert Mayer at Publius Pundit has the State Department plans for ’06, including:

The United States wants to continue to work through NATO as the core trans-Atlantic link but to broaden and extend NATO’s mandate to Africa, Asia and the Middle East. In working with the European Union, “the next great mission for us together is spreading the freedom we enjoy in Europe and America,” says Nicholas Burns.

“We also need to complete our work in Europe by attending to the Balkans, Ukraine and Russia,” he said. “We need to continue fostering democracy and opposing repression in Central Asia and the Caucasus. And, most importantly, the United States and Europe need to intensify our efforts in the broader Middle East, as well as Africa and Asia.”

If ’06 is anything like last year, it will be another very busy and exciting year for the Secretary of State. Let’s hope freedom and democracy continue their march!