** As the US sees a steady decline in violent crime, French crime is escalating **

10,000 of those 45,000 torched French vehicles were set ablaze during the riots of October and November.

When you break these numbers down:

As the US sees less crime, France grows more violent 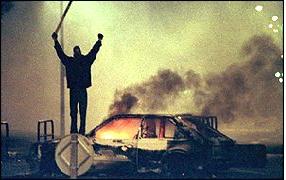 Almost every night, cars are set alight in the streets between the crumbling apartment blocks in which most people live.

“They throw stones and bottles all the time,” said Christian Meyer, chief of police in Trappes. He says his police station has also been fire-bombed on several occasions.

Set in a rundown Parisian suburb, the poor residents ­ white French and people of North and West African origin ­ have become alienated from society at large and see the state not as a source of help, but only as a threat.

This sense of alienation is at the root of the problem in real life, according to Professor Alain Bauer, an expert on policing and urban violence at Sorbonne university.

That was written by the BBC in 2001 describing conditions around Paris.

It sounds like the same reports written by the BBC in 2005 describing the rioting in Paris.

The French Blog No Pasaran reported on Thursday that violent crime is on the rise in France. (UPI)

The French Ministry reported an overall 1.3 percent drop in crime and delinquency last year, compared to 2003. But the number of violent incidents committed against other individuals rose to 5,000 last year.

More than 45,000 vehicles were torched last year, according to the report. That includes an estimated 10,000 incinerations during the riots that swept France last October and November.

The unrest was largely blamed on ethnic-immigrant youths.

Sarkozy also called for more illegal immigrants to be deported.

However, the US has seen a steady decrease in violent crime since 1995, from a victimization rate of 51.2 in 1994 to 21.1 in 2004 total violent crimes per 1,000 people. Violent crime rates throughout the E.U., Australia, and Canada have recently begun to equal and even surpass those in the United States.

It appears the French have a few things they could learn from their American friends.

Conblogeration thinks France may be burning for a while, yet.