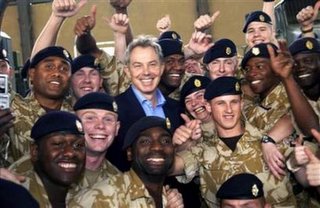 On a surprise visit to Iraq, Tony Blair says the situation has improved over the last year:

Blair flew into southern Iraq from Kuwait aboard a Royal Air Force Hercules transport plane for a morale-boosting, pre-Christmas visit to some of the 8,000 British troops based in Iraq.

Blair repeatedly has said British troops will not leave Iraq until they are asked to go by the Iraqi government.

“You don’t set an arbitrary timetable,” Blair said Thursday, briefing reporters at a British logistics base near Basra in southern Iraq. “The whole purpose is to build up the Iraqi security forces so we can draw down our own strength.”

Britain’s military contingent in Iraq, based around Basra, is the second-largest after the United States’. Ninety-eight British troops have died in Iraq since the 2003 invasion.

He said 100,000 Iraqi troops were now trained and ready to take over security duties. Gen. George Casey, the top U.S officer in Iraq, told Blair that by next summer, 75 percent of security duties in some parts of Iraq would be led by Iraqi troops. 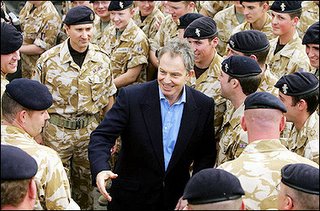 British Prime Minister Tony Blair (C) with troops at Shaiba Logistics Base in Basra, Iraq. Blair and Donald Rumsfeld counselled caution over hopes for a quick fix in Iraq in surprise visits to the war-torn country, as former dictator Saddam Hussein stood by claims he had been beaten by US guards.-ha!(AFP/Adrian Dennis)

Blair says the situation in Iraq has greatly improved over the last year:

Blair, on his fourth trip to Iraq since the 2003 U.S-led invasion, said good progress was being made in training Iraqi security and police forces to protect the country.

The ability of Iraqis to manage the country’s security is the key condition for the 8,000 British troops, most of them stationed in the southeast near Basra, to return home.

Asked if six months was a viable time for a withdrawal to begin, Blair said: “If everything goes to plan. It is our strategy, we want to draw down our own forces.”

“This is a completely different situation from the situation a year ago,” Blair told reporters at Shaiba logistics base near Basra, home to half the UK contingent in Iraq.

Tony is still a hit with the troops! 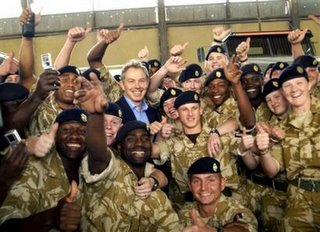 Britain’s Prime Minister Tony Blair poses with British soldiers at Shaibah logistics base in Basra, Iraq, Thursday Dec. 22, 2005. Blair was on his fourth visit to Iraq, where he met with senior US military officials and was assured that the process of turning security over to Iraqi forces was proceeding quickly. (AP Photo/Will Craig, Ministry of Defence, ho)