A year after the devastating Asian tsunami, the amazing survivors of the disaster that killed an estimated 230,000 people in southeast Asia are still struggling to put their lives back together. The anniversary this week is a harsh reminder of the challenges of the last year…

Difficulties are said to bring out the best in man. Rizal Shahputra has shown that, with a calm mind, the limits of human endurance can be stretched beyond imagination. 23-year-old Shahputra, from the devasted province of Aceh, said that he was cleaning a mosque when the tsunami struck his village. Swept off the coast by the death waves, he lived off rainwater and coconuts that floated by.

Rizal was spotted floating on tree branches 8 days after the tsunami.

Acehnese Rizal Shahputra stands on the tree branches and waves to a cargo ship and later speaks to journalists inside the ambulance upon his arrival at the Northport in Klang. (AP)

It was only after eight days that help came in form of a Malaysian cargo ship. He was finally rescued by the crew of Durban Bridge. “He waved at me, he was standing on what look like a tree,” said Huang Wen Feng, crew member of the Malaysian cargo ship that picked him up on Monday evening. “When I saw him I was very surprised.” He said. (Times of India)

In April Rizal started another challenge when he enrolled into classes at a university in central Kuala Lumpur, the first step in his dream of getting a degree in Communications Technology and a career in Internet and multimedia.

That morning, when the ground began to shake, Ari Afrizal had been on a scaffolding, hammering nails, part of a crew building a beach home in Aceh Jaya town, about 150 miles from Banda Aceh. Frightened, the crew moved away from the house and squatted in the sand.

Ari felt as if he were caught in a giant washing machine. Tossed 1,500 feet inland, he banged against a mango tree and grabbed a branch.

“I saw my friends also hanging on to trees. I thought the world was coming to an end,” he said. “I kept praying hard to Allah for my life.”

Ari survived an amazing 15 days afloat on a board, then an old boat, and then a raft with a hut and water. 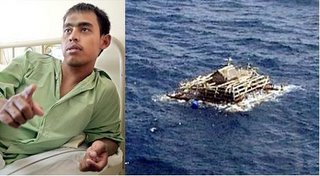 Tsunami survivor, Indonesian Ari Afrizal, drifted on the Indian Ocean for two weeks, living on coconuts that he pried open with his teeth while floating on pieces of wood, then a broken boat, and finally a fishing raft. (GP)

As the tsunami receded, it pulled him under and sucked him out to sea. He swam and floated for an hour before his first stroke of luck: A wooden plank about 5 feet long drifted by. He clambered aboard.
The next day, a leaking, listing fishing boat drifted by. Ari swam to it and found no one on board.

As he drifted, he thought of his parents, his two elder brothers, a younger brother and a sister. He knew the giant waves were too powerful to have spared their home, only a mile from the shore. His girlfriend’s house was not too far either, he said, the brown eyes misting slightly.

He was adrift for days in a busy shipping lane near Sumatra, where ships carrying cargo from Europe, India, Africa and the Middle East steam toward Singapore, Malaysia and Thailand. Many ships passed by Ari’s small boat, barely noticeable in the vast carpet of water. He was sure one would notice him.

By then, the boat was listing badly, the leak worsening. The sun was harsh and it burned his skin.

He’d been drifting for seven days when he spotted a large, unmanned raft with a hut on it. Abandoning the sinking fishing boat, he swam to the raft and found a gallon bottle of water to slake his thirst. Coconuts were still plentiful in the sea.

Around him, six shark fins pierced the gentle water.

On the 15th day, Ari awoke to the sight of the bow of a container ship looming over him.

She floated on a door for two days. 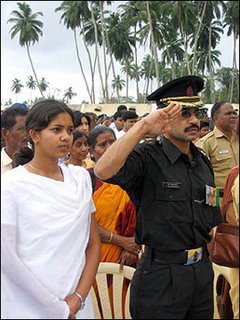 In a ceremony today on Car Nicobar Island, Meghna Raj Shekhar, who survived the tsunami by floating on a door for two days, trembled visibly when she sighted her favourite coffee mug in the rubble that had once been her home on India’s Nicobar island(AFP)

Meghna was swept out to sea along with her father, Squadron Leader Raj Shekhar, her mother, younger brother and 77 others. While the others drowned she floated for two days on a wooden door.

“I remember seeing choppers passing overhead 11 times and several times relief planes passed but they did not spot me and finally a wave threw me back on the shore,” Meghna said. The badly-bruised girl was found 20 kilometres (12 miles) from her wrecked home two days later.

“I fought off sea snakes to stay alive.

Baby 81 made a trip to the US after the disaster. But, his parents were not happy with “Good Morning America.” 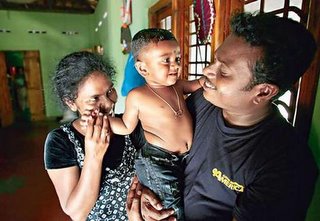 Lucky boy … Baby 81 – real name Abilash Jeyaraja – with his parents, with whom he was reunited after DNA tests. (SMH.com.au)

Baby 81 is the luckiest toddler in the world? His doting parents believe so. In the aftermath of the Boxing Day tsunami, Abilash Jeyaraja also became the most celebrated survivor.

He was “Baby 81” – rescued by a samaritan who found him alone, wrestling for life, in the rubble along the eastern coast of Sri Lanka.

“He is a lucky, lucky boy,” says his proud father as the toddler performs for the camera.

Abilash, now 14 months old, got his nickname because it was said he was the 81st admission to the pediatric ward of the Kalmunai Base Hospital on the day of the tsunami.

Abilash is an extraordinary survivor who somehow avoided waves that killed almost 40,000 of his compatriots, a third o
f them children.

His father, a barber, and his mother, his full-time carer, don’t care for the tag “Baby 81” these days.

An estimated 1000 children in Sri Lanka lost either their mother, father or both parents. They are known as the Tsunami Generation.

A year after his ordeal, meanwhile, the luckiest toddler in the world is in boisterous form as he displays his new walking skills to a rapt audience.

And little Abilash has some big expectations to fulfil. “I would like him to study in a foreign country,” his father says.