The good news is that Palestinians are optimistic with 68% feeling general optimism for the future.

The bad news is that 59% of Palestinians in recent exit polls favor Hamas who favors Israel’s destruction.

Hamas is positioned to make big gains in the upcoming January Parliamentary elections. 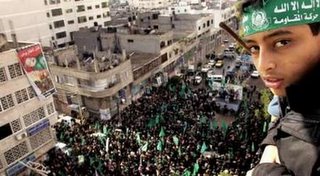 A Palestinian boy wears a Hamas banner on his head during a Hamas rally in Gaza December 23, 2005. Thousands of Hamas members marched in Gaza City on Friday, 12/23, to condemn the U.S. and Europe and to demand President Mahmoud Abbas not delay the upcoming parliament vote. (REUTERS/Mohammed Salem)

The militant Palestinian Group Hamas is participating in parliamentary elections for the first time next month. The group currently leads the Fatah Movement of President Mahmoud Abbas in opinion polling:

Opinion polls in the West Bank and Gaza show it is ahead of the ruling Fatah party led by Mahmoud Abbas, the Palestinian president, ahead of the 25 January election.

Israel wants to keep Hamas – which is sworn to the Jewish state’s destruction – out of the election process since it has carried out bombings. Tel Aviv has said it will not negotiate with any Palestinian government that includes Hamas.

Here are the results from recent polling on the upcoming Palestinian elections:

* There is a slight increase in general optimism towards the future reaching 68% in December 2005 compared with 61.3% last May.
* There remains a considerable majority of Palestinians (68.2%) who want to participate in the upcoming PLC elections although the ratio was higher in May 2005 (75.1%).
* The majority of the Palestinians expect the upcoming PLC elections to be honest (52.7%) while 39.9% expect the elections to be dishonest.
* Mahmoud Abbas “Abu Mazen” remains the top trusted public figure with a ratio of 15.5% compared with 24.8% in May 2005.
* Imprisoned Marwan Barghouthi got the second ranking with a ratio of 7.8%.
* There is a disturbing statistic regarding fundamentalism versus secularism: 46% of the Palestinians said they would choose fundamentalist trends over 37.5 who would choose secular ones.

But, this recent exit polling data raised eyebrows in the international community:

The results of the exit poll in the four large cities show that Hamas’ lists received 59% of the vote compared to 26% for Fateh and 15% for all other lists.

But more importantly, the results show that when it comes to voting intentions in the upcoming legislative elections, Hamas will most likely come out victorious with 41% of the vote compared to 21% for Fateh and 15% for all other lists, while 23% remain undecided. Hamas’ lists received considerable number of votes from voters who do not consider themselves supporters of Hamas. For example, while 42% in all four cities stated that they support Hamas, the percentage of the actual votes received by Hamas in our poll was 59% as indicated above.

Hamas continues to call for the destruction of Israel.

On Wednesday, the four international supporters of the Middle East peace process said that the next Palestinian Cabinet should not include members of Hamas or other militant groups committed to violence.

Egyptian intelligence has reportedly passed on a warning from the US and the EU that aid to the Palestinian Authority would be suspended if Hamas were to make big gains and become part of the future Palestinian government.