As Gaza battles escalate between factions and before elections planned for next month, Israel fears a Palestinian Collapse. 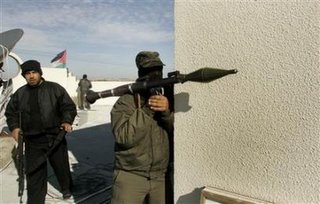 Palestinian gunmen from the Fatah movement take position on the roof of a government building after storming the building, northern Gaza Strip, December 27, 2005. (Mohammed Salem/Reuters)

Gunmen from the ruling Fatah movement exchanged fire with police at a Gaza election office on Wednesday:

The gunmen demanded changes to the latest proposed list of election candidates, which was due to be submitted by Abbas on Wednesday as a way to patch up a damaging split between Fatah veterans and younger rivals.

The growing violence has driven some officials to urge Abbas to postpone the election, in which Hamas Islamic militants stand to benefit from the confusion within long-dominant Fatah.

Gunmen from Fatah’s al-Aqsa Martyrs Brigades exchanged fire with police in two separate firefights. One policeman was wounded before the militants were driven off. Tense police, masked like the gunmen, patrolled near election offices.

Elsewhere, al-Aqsa fighters forced at least three offices to close, though the electoral commission said work was resuming in some places after police restored order.

At meetings in Gaza on Tuesday, Abbas tried to get militant leaders to agree to halt cross-border rocket fire and renew their pledge to follow a ceasefire that brought 10 months of relative calm.

But a leader of Islamic Jihad, which has carried out suicide bombings despite the truce and fired regular rocket salvoes, said he did not believe there would be a ceasefire extension.

“When the time is up there will be a general position, but calm will most likely not be extended,” said Khaled al-Batsh.

Hamas has suggested its comparative restraint could end if elections are not held on time.

Palestinian elections are scheduled for next month. 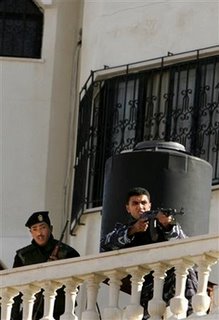 Palestinian policemen take up position on the roof of the election office during an exchange of gunfire in Gaza, December 28, 2005. (Suhaib Salem/Reuters)

On Sunday, Israeli military sources reported that Palestinian Leader Mahmoud Abbas is at an all time low since taking over for Yasser Arafat in November 2004 and is unable to enforce his directives especially with security.

Also today, Israeli jets blasted a Palestinian base outside of Beirut where rockets had been fired into Israel. The rockets fired by Hizbollah into Israel caused casualties but Israel is not giving out details at this time.