Claudia Rosett ends the year with an Oil for Food Scandal thriller!
(via Free Thoughts) 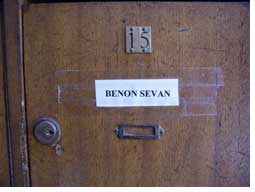 Curiously, the name on the mailbox for the “aunt’s apartment” was that of the man in charge of the Oil for Food Program himself… “Benon Sevan.”

Claudia Rosett won’t let you down on her last piece for the year on the UN Oil for Food Scandal in the Wall Street Opinion Journal. Today she brings you to the island of Cyprus with US House Representative Investigators in…

“The Search for Benon Sevan”

Mr. Sevan, the longtime U.N. staffer to whom the secretary-general entrusted from 1997 through 2003 the running of Oil for Food. That blew up into the biggest scandal in U.N. history–involving billions in graft and smuggling, a global network of kickbacks to Saddam Hussein, payoffs by Saddam meant to bribe members of the U.N.’s own Security Council, and assorted instances of alleged bribes to U.N. officials. One of those officials, allegedly, was Mr. Sevan himself, who while running Oil for Food took some $147,000 in payoffs from Saddam’s regime, according to the Volcker committee.

The U.N. will not give out any information on Mr. Sevan’s current location. At last week’s press conference, when Mr. Annan was asked in passing about Mr. Sevan, he did not even address the question. Anyone inquiring further has had to make do with hearsay that Mr. Sevan has returned to his native Cyprus, which does not have an extradition treaty with the U.S.

Investigators for Rep. Henry Hyde’s International Relations Committee are now prepared to add some illuminating details–starting with their encounter with Mr. Sevan himself, less than three months ago, in Cyprus.

They went to Nicosia, the capital of Cyprus, trying to track down details of the case, including the fate of Mr. Sevan’s deceased aunt, Bertouji Zeytountsian. By Mr. Sevan’s account to Mr. Volcker, this aunt, while living in Nicosia as a retired government worker on a pension, had sent him funds totaling some $160,000 during the last four years in which he was running Oil for Food, 1999-2003. The day after the U.N. investigation into Oil for Food was announced, in March, 2004, Zeytountsian fell down an elevator shaft in her Cyprus apartment building. A few months later, she died.

The investigators on Oct. 14, a Cypriot police official showed them the way to the building. There, printed plainly on a mailbox at the entrance to the apartment block, was the name not of Mr. Sevan’s aunt, but of Benon Sevan himself.

The investigators went up to the eighth-floor apartment where the aunt had lived. They knocked, and the door opened.

There stood Benon Sevan. As one of the investigators describes it, Mr. Sevan came to the door “in shorts, no shirt, and sandals, smoking a cigar.” Apparently everyone was surprised to come thus face-to-face. Mr. Sevan was polite but did not invite them in. They chatted across the threshold. He told the congressional investigators to address all questions to his lawyers, saying, “My conscience is clear.”

The investigators turned to go, and, as one of them recounts, as they headed for the stairs, Mr. Sevan told them, “You can take the elevator. It’s fixed now.”

It is nice to know Aunt Bertouji had left a pair of shorts that Benan could squeeze into.