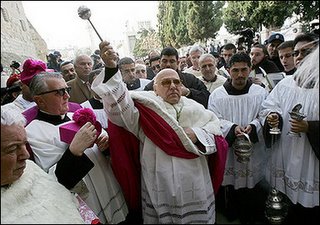 Latin Patriarch of Jerusalem Michel Sabbah sprays water in front of the Nativity Church in the Biblical West Bank town of Bethlehem. Thousands of pilgrims descended on Bethlehem as the birthplace of Jesus Christ enjoyed its busiest Christmas of the young century.(AFP/Menahem Kahana)

Israel’s most senion leader says that Bethlehem has become like a prison, that the wall should be dismantled and that “bridges of peace and love” should be built instead.

Israel’s most senior Roman Catholic leader said Bethlehem has become an “immense prison” since the erection of the West Bank barrier.
The Latin Patriarch of Jerusalem, Michel Sabbah, called for all barriers between people to be dismantled.

The patriarch was speaking in Bethlehem, where he will celebrate the traditional Christmas Eve mass.

Israel says the barrier is needed to keep out Palestinian attackers, but Palestinians regard it as a land grab.

The patriarch, who is the Pope’s representative in Israel, called for the wall’s dismantling, and said “bridges of peace and love” should be built instead.

“This is the Holy Land and it should be treated as a holy area. We wish that this road will stay open so all Christian pilgrims can enter every day of the year, every year.”

There is still tension, with Palestinians complaining about the lack of jobs and frequent arrest raids by Israeli troops.