Not even 48 Hours into office and Bolivian President Evo Morales Praises Castro and calls Bush a terrorist. 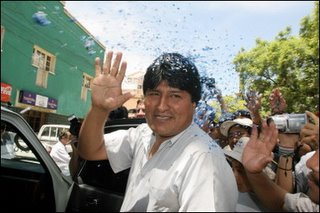 Fresh off his landslide presidential election win in Bolivia, Evo Morales held back for nearly 48 hours before calling US President Bush a “Terrorist”… a nice start for the first former coca farmer:

Evo Morales, Bolivia’s president-elect, has branded George Bush, the US president, a “terrorist”, but a spokesman in La Paz said the remark must have been mistranslated.

Morales spoke in Spanish to Aljazeera, which dubbed his comments into Arabic.

“The only terrorist in this world that I know of is Bush. His military intervention, such as the one in Iraq, that is state terrorism,” Aljazeera quoted him as saying.

“There is a difference between people fighting for a cause and what terrorists do,” Morales was quoted as saying.

Morales also praised communist dictator Fidel Castro in one of his first interviews since taking office:

“Now I have the opportunity to be with him in this struggle, in search of peace with social justice,” he said.

Morales praised the resilence of Cuban in resisting the decades-old US trade embargo against the island. “I hope the government of the United States lifts it some day.”

“I want to tell the Cuban people, its government and its leaders: thank you, for showing how to govern, to Latin America and the rest of the world, and for defending its dignity and sovereignty. A special and revolutionary greeting to all the Cuban people,” Morales said.