As Dick Cheney arrived to inspect the earthquake ravaged country of Pakistan, a new poll released shows that Anti-American sentiment in Pakistan is at an all time low since 9-11. 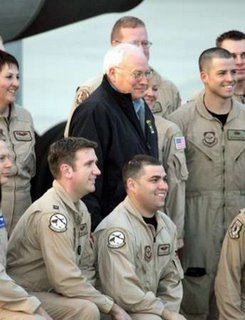 The poll concludes that the humanitarian assistance from America has a lot to do with the changed attitudes towards America:

Long a stronghold for Islamic extremists and the world’s second-most populous Muslim nation, Pakistanis now hold a more favorable opinion of the U.S. than at any time since 9/11, while support for al Qaeda in its home base has dropped to its lowest level since then. The direct cause for this dramatic shift in Muslim opinion is clear: American humanitarian assistance for Pakistani victims of the Oct. 8 earthquake that killed 87,000. The U.S. pledged $510 million for earthquake relief in Pakistan and American soldiers are playing a prominent role in rescuing victims from remote mountainous villages.

Released today, the poll commissioned by the nonprofit organization Terror Free Tomorrow and conducted by Pakistan’s foremost pollsters ACNielsen Pakistan shows that the number of Pakistanis with a favorable opinion of the U.S. doubled to more than 46% at the end of November from 23% in May 2005. Those with very unfavorable views declined to 28% from 48% over the same period. Nor is this swing in public opinion confined to Pakistan. A similar picture is evident in Indonesia, the world’s most populous Muslim nation. Again that’s largely because of American generosity in the wake of a natural disaster. A February 2005 poll by Terror Free Tomorrow showed that 65% of Indonesians had a more favorable opinion of the U.S. as a result of American relief to the victims of last December’s tsunami. If these changes in Pakistan and Indonesia influence thinking in other countries, then we could be looking at a broader shift in public sentiment across the Muslim world.

I’m wondering, also, if the fact that Americans aren’t blowing up wedding parties has anything to do with it?

The Muslim Leaders appear to be changing their tune towards terror as well… Well, most of them, anyway!

During Vice President Cheney’s visit to the earthquake ravaged area in Pakistan he defended the Bush administration’s use of secret domestic spying that “It’s not an accident that we haven’t been hit in four years.”