Over 90 people have come down with a mysterious illness in Chechnya. Authorities still have no definite cause for the outbreak that is mainly affecting children. Two more cases in neighboring regions were reported on Saturday (12-24).

In November, a terrorist attack with the use of strong poisons was prevented in North Caucasus near Chechnya. The poison cache was discovered on the Chechen-Ingush border. Terrorists intended to use two types of poison. One of them is a cyanide poison and the other is still unknown. Experts believe that the use of minimal doses of these poisons in public places could have led to many victims. 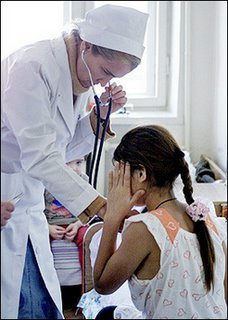 A Chechen doctor inspects a girl in the childrens hospital at the Chernorechenskaya village outside Grozny. Dozens of children in war-torn Chechnya have come down with a mysterious illness that doctors and emergency workers said may have been caused by poisoning.(AFP/Khasan Kaziyev)

The spread of the disease has been a source of increasing concern for the Chechen population, despite active efforts taken by the government commission to explain the possible reasons behind the disease to locals.

On Friday (12-23) Russian officials issued a final diagnosis attributing an illness that has mainly affected children and teenagers in Chechnya to “psycho-emotional stress.”

Other doctors are reporting ethyl glycol as the culprit. Another doctor in Dagestan, quoted by Reuters, said the victims had probably ingested the chemical through a contaminated water supply.

Another child was hospitalized today with the mysterious disease in what Russian authorities are calling a psychological disorder.

A Chechen dissident in London today (12-26) asked for an international inquiry into the mysterious disease.