The mainstream media today likens body slamming, screaming, blood on his hands, f***ing shameless, “He lied to us.”, cussing, crack up, Al Franken to the legendary Bob Hope.

BUT BOB HOPE WAS NO MAINSTREAM ZOMBIE!
VIDEO HERE 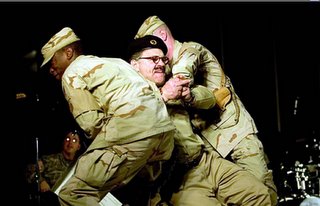 Comedian and fierce anti-Bush critic Al Franken is traveling to visit troops in Iraq this week in what he calls his “Very Bob Hope” show:

Comedian Al Franken is headlining USO shows at military bases in Iraq this week. Franken’s troupe is touring the desert circuit from Baghdad to Balad, putting on a show that he calls “very Bob Hope.”

Like Hope, the entertainment legend who died in 2003 at age 100 and was the mainstay of USO shows for three generations, Franken opens with a monologue about Army chow. Two Dallas Cowboys cheerleaders follow with dance routines. Country singers Mark Wills, Craig Morgan and Keni Thomas then belt out odes to patriotism. Franken, dressed as Saddam Hussein, then does a comedy skit with TV actress Traylor Howard.

The USO is having a hard time recruiting entertainers because of their Iraq anti-war posturing:

Franken, 54, is making his third December tour of war zones. “I think I may be the only comedian who’s played Abu Ghraib,” he said, referring to his visit to the prison near Baghdad where U.S. guards had abused Iraqi detainees.

Robin Williams, 54, said he’d like to return to the Middle East this spring for what would be his fourth visit since 2002.

Williams – who like Franken has been an outspoken critic of Bush’s management of the war – and Newton, a Republican who backs Bush, say some stars have turned down the USO because they thought such performances would amount to endorsing the war.

“And I say it’s not,” Newton said. “I tell them these men and women are over there because our country sent them, and we have the absolute necessity to try to bring them as much happiness as we can.”

Newton said “the fear of danger, and pressure from wives and kids, more than the politics” keeps many celebrities out of today’s war areas. He said one National Basketball Association star whom he would not identify asked: “How safe am I going to be?” After Newton assured the player that “you’ve got the entire U.S. military around you,” the player agreed to visit Kuwait and Qatar, Newton said.

“They’re scared,” country star Morgan said after Wednesday’s show. “It’s understandable. It’s not a safe and fun place, and a lot of people don’t want to take the chance.”

Al Franken also toured swing states last year during the presidential election to sway support towards John Kerry, not that it did much good.

Jim Hoft
Jim Hoft is the founder of The Gateway Pundit, one of the top conservative news outlets in America. Jim was awarded the Reed Irvine Accuracy in Media Award in 2013 and is the proud recipient of the Breitbart Award for Excellence in Online Journalism from the Americans for Prosperity Foundation in May 2016.
Developing: President Trump's Independence Day Greeting Included Teaser on Big News Coming Soon
Eagles Wide Receiver DeSean Jackson Says He Doesn't Hate Jews After Posting Anti-Semitic Quotes Attributed to Adolf Hitler
UN Says United States Broke the Law by Drone Bombing Notorious Iranian Terror Leader Qassem Soleimani
EPIC TUCKER CARLSON: Can the Left Lead a Country they Hate? (VIDEO)
Washington Post Says Washington and Lee University MUST CHANGE ITS NAME because Washington "Perpetrated Racial Terror" -- So What About the Washington Post?
See more...