BESIDES GARDENING, SADDAM SAYS HE WAS BEATEN EVERYWHERE ON HIS BODY AND STILL HAS THE MARKS TO PROVE IT,
VIDEO HERE

What will the New York Times say about this? He says he has visible signs of the abuse all over his body. Will those marks be splashed on the cover of Newsweek? What will Teddy Kennedy say? That we closed Saddam’s torture chambers only to open them up as a Saddam torture chamber?… The only good news out of this is that Saddam continues to keep a great garden despite his beatings. 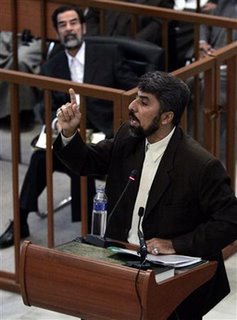 Former Iraqi President Saddam Hussein listens as witness Ali Hassen Mohammed Al-Haideri gives testimony during court proceedings against Saddam and his co-defendants during the resumption of their trial December 21, 2005 in Baghdad. (John Moore/Reuters)

Saddam argued today that the Americans had beat him all over his body during his defense today at his trial for mass killings. Things must be looking not so good for the gardener/mass murderer:

Saddam Hussein has been beaten and tortured by the Americans, he has alleged at his trial in Baghdad.
“I have been beaten on every place of my body, and the signs are all over my body,” he told the court.

Christopher Reid of the US Embassy in Baghdad rejected the allegation, telling CNN it was “absolutely bogus”.

Saddam Hussein is on trial over the killing of 148 people in the Iraqi Shia village of Dujail in 1982. He denies responsibility for the deaths.

The prosecution ridiculed his claim of torture, saying the former Iraqi leader was being held in an air-conditioned room when some of Baghdad had no power.

Saddam’s outburst came after a witness claimed that Saddam’s henchmen tortured people by ripping off their skin!

Chief prosecutor Jaafar al-Mousawi said he would investigate and that if American-led multinational forces were abusing the former Iraqi leader, he would be transferred to the custody of Iraqi troops.

“I want to say here, yes, we have been beaten by the Americans and we have been tortured,” Saddam said, before gesturing to his seven co-defendants around him, “one by one.”

After sitting quietly through several hours of testimony, Saddam said he’d been beaten “everywhere on my body. The marks are still there.”

Saddam and his co-defendants are on trial in the deaths of more than 140 Shiites following a 1982 assassination attempt against him in the town of Dujail, north of Baghdad.

Standing in the fenced-in defendant’s area, Saddam complained at length about the conditions of his detention, engaging in a debate with al-Mousawi. Some of the exchange was edited out of the televised feed of the trial, which later adjourned until Thursday.

Saddam also told the court that he knew the name of the person who betrayed his hiding place when U.S. forces found him in December 2003.

Previously on the Saddam Trial:
Surprise! Ramsey Clark to Join Saddam Legal Team
Saddam is Preparing for Trial
Saddam’s Top Lawyer Quits
“Team Saddam” Back in Court
“Saddam the Victim”… Are you buying it?
Ramsey Clark Arrives in Iraq, Vows to Save Butcher
Saddam Defiant, Ramsey Clark with Defense as Trial Resumes