One banner read, “Al-Jazeera are terrorists.” 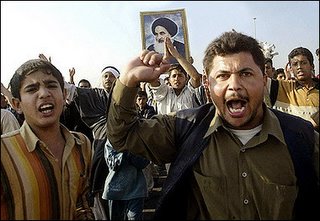 Iraqis demonstrate in the southern city of Basra to protest against what they claimed were defamatory comments about Shiite Grand Ayatollah Ali al-Sistani aired on Al-Jazeera television. A massive security clampdown brought Iraq close to a halt on the eve of a key election aimed at restoring full sovereignty and stability to the turbulent country.(AFP/Essam al-Sudani)

Thousands of Iraqis protested in Baghdad and Basra against Aljazeera television yesterday over comments made against Grand Ayatollah al-Sistani:

The demonstrators, on foot and in pick-up trucks, with others provided a motorcycle escort, paraded through the streets of the Shiite holy city of Najaf, chanting: “Sayyed Ali, the people are with you!”

Sistani, Iraq’s highest Shiite religious leader, is a Sayyed, or descendant of the prophet Mohammed.

In eastern Baghdad, several hundred Shiites turned out on foot to protest in sprawling Sadr City.

Carrying portraits of Sistani and banners calling for a boycott of the television station, they cried on Wednesday: “Al-Jazeera is a Baathist (Iraq’s former ruling party) and terrorist channel, and an enemy of Islam!”

In a debate Tuesday night entitled “Against the Tide”, the London-based Iraqi writer Fadel al-Rubaye said Shiite religious leaders had “favored the entry of American troops in Iraq” and urged Iraqis not to resist the occupation. 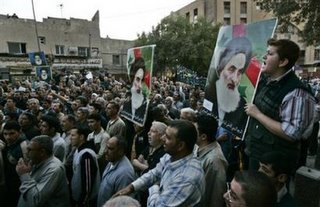 Hundreds of Shiite protestors attend a rally as some hold posters with a portrait of Grand Ayatollah Ali al-Sistani during a demonstration in Baghdad, Iraq, Wednesday Dec. 14, 2005. Angry Shiites marched to protest remarks made on a talk show on Al-Jazeera television, in which a Sunni guest criticized Iraq’s Shiite religious leaders. (AP Photo/Hadi Mizban)

Al-Jazeera journalists were banned from working in Iraq after government complaints that the channel favored Sunni insurgents.

In late October Ayatollah Sistani said he would not endorse any political groups for the December election. Before the January elections, al-Sistani’s support helped the Allies win over many Iraqi Shia. He also urged Iraqis to vote and questioned those who did not asking what had they gained by not voting.

Aljazeera.net did not report on the protests.

GOPinion is carrying this story today.