Independent Conservative has this:

Iraqi Citizen Betty Dawisha voting from the US offered strong words for President Bush’s detractors after casting her vote.

“Anybody who doesn’t appreciate what America has done and President Bush, let them go to hell!”

Iraqis are selecting 275 members to Parliament this week. 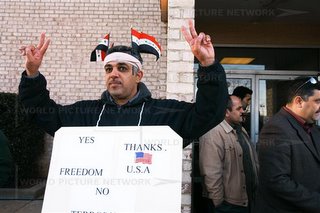 Ayad Saidi, an Iraqi citizen from Najaf expresses his support for the the U.S. war in Iraq in McLean, VA. on Tuesday, Dec. 13, 2005. Iraqi citizens will cast their votes over the next three days to help elect Iraq’s first full-term parliament. The voting center is one of eight nationwide. (WPN)

More than 500 polling stations have been set up in 15 countries where Iraqi exiles have concentrated after fleeing the former Saddam Hussein dictatorship or the rampant violence since the 2003 US-led invasion.

Expatriates have until Thursday to cast their ballot when their homeland will grind to a halt under draconian security measures intended to minimise bloodshed as the 15.5 million electorate elects a 275-member parliament. 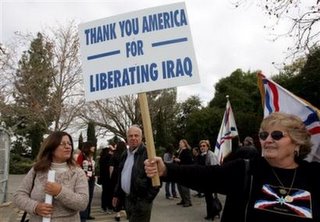 Iraqi President Jalal Talabani says that he will not seek reelection:

Talabani, leader of one of Iraq’s two main Kurdish parties, became president after the January 30 election for an interim assembly. Since then, Iraq has drafted and approved a new constitution which he says waters down his role.

Talabani’s decision not to seek re-election suggests he might seek a more powerful post in the new government. 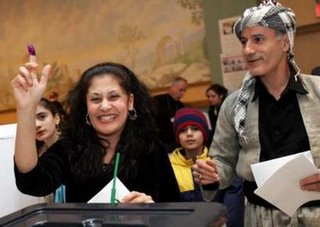 Iraqi Kurd expatriate Zian Karim (L) holds up her purple stained finger as her husband Salah watches her prepare to cast her absentee ballot in Iraq’s election at a polling station in Farmington Hills, Michigan December 13, 2005. Karim and her husband are two of 240,000 Iraqi’s in the U.S. elegible to vote for Iraq’s first parliament since the overthrow of Saddam Hussein in 2003. (REUTERS/Rebecca Cook)

Iraqi American haider Ajna sends this translation of a headline and news published by Iraq Ulghad on December 12th.

An Iraqi Government representing all Iraqis will win the upcoming election

“In an interview with Iraqi Foreign Minister Hushiar Ziebari said an Iraqi Government representing all Iraqis will win the upcoming election. This is the result of a very strong political campaigning. The new government will strongly help stability and security. Ziebari, who appeared to be very optimistic about the elections on the 15th of this month, said, “The elections will take place as planned on the 15th of this month and there is very competitive campaigning going on. I believe the election will sprout a government, which represents all Iraqis, a stable government, which will serve for four years. This will greatly contribute to stability”.

I read and hear from Iraq of many reports of Imams in Shiite and Sunni mosques calling on their congregations to go out and vote on December 15th. Telling them it is their patriotic & religious duty to vote. This is a far cry from all the boycotting, which happened in the January elections. Iraqi newspapers are filled with political interviews and advertisements. Most religious leaders are not endorsing any one political movement. They are calling on Iraqis to vote for stability and to defeat terrorism. Religious leaders are indorsing the elections on Thursday. Lets say special prayers for our troops in Iraq and the Iraqi people during these vital days for this budding democracy Iraq. 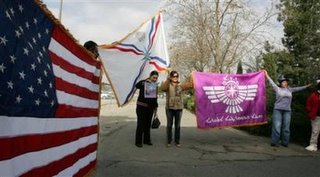 Voters campaign outside of a polling place in Pleasanton, Calif., Tuesday, Nov. 13, 2005 for the Iraq’s national election. Iraqi expatriates across the United States cast absentee ballots Tuesday in their homeland’s historic parliamentary elections, hoping to pick leaders who can curb seemingly uncontrollable violence and allow many to visit home _ in some cases for the first time in decades. (AP Photo/Paul Sakuma)

Driftwood has the specifics on how Iraq is on the fast track to sovereignty today.