The situation at Dongzhou Town, Red Bay, in the city of Shanwei, Guangdong Province is rapidly deteriorating. According to the villagers, the government has not only arranged tanks to occupy the city, machine guns have also been set up, ready to strafe villagers on the street at anytime. Up to now, 70 people are known to have been shot to death. Most of the dead are young people in their twenties. The dead bodies were buried to destroy any evidence of the shootings. Families are not allowed to claim the bodies of their relatives. Sound of Hope Radio has phone-interviewed villagers of Dongzhou Town regarding the case.

Villagers in Dongzhou are reporting that 70 people,mostly in their twenty’s have been shot dead by Chinese Authorities! 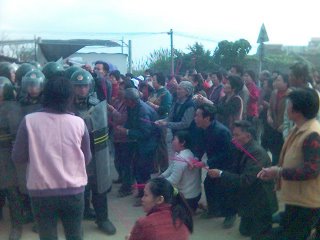 The family members of those who were killed in Dongzhou village beg police to get the bodies of their loved ones for burial. (The Epoch Times)

Here is what is being reported on Sound of Hope Radio Network:

Hundreds of armed police have sealed off a township near the southern Chinese city of Shanwei following violent clashes between local residents and security forces in which at least two people have died.
Villagers said an atmosphere of fear had settled on Dongzhou after the armed crackdown late Monday and early Tuesday, in which many reported seeing riot squads from the People¡¯s Armed Police firing on protesters who fought back with home-made petrol bombs and threw rocks.

On Thursday public security personnel fished up more than a dozen bodies from a ditch.

The Epoch Times reports the latest on the situation in Dongzhou Village near Shanwei, China:

Villager: “They didn’t allow us to go inside to identify the bodies. Approximately 70 people were shot to death. The government, however, reported only one or two deaths. In fact, they are covering up things.”

Reporter: “Did you go to claim any of the bodies?”

Villager: “Some bodies were buried by the government, some could not be found, and some were still there, not yet buried.”

Another villager said that there were many deaths and injuries. Many people are still missing at present. Tanks have lined up at the highest spot in the northern part of the town. The villager expressed that he wished the outside world would pay attention to their situation and provide help.

(Recording) Villager: “Everyone is indeed moaning and groaning, yet there is nowhere to go to appeal the injustice. Are our farmers’ lives truly worthless? They can just kill us at will, shoot innocent farmers at will? I hope you can report the facts about what is happening here. Now, the villagers are living in deep water and scorching fire. Those government officials truly are tyrants.”

A few photographs of the situation in Dongzhou have dangerously made their way to the Western media. 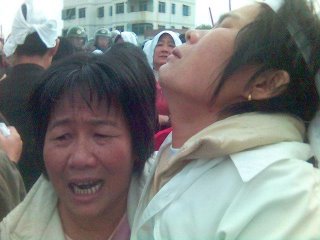 This woman’s (right) husband was known as a very honest person. He just came to watch the scene that day, but was hi tin the head by a stray bullet and died. (The Epoch Times)

The Chinese Government has cut off nearly all communications to the Chinese Village of Dongzhou.

On June 4, 1989, Chinese Authorities moved tanks in on democracy protesters in Tianenmen Square, China slaughtering hundreds of their own citizens wanting freedom.

A Chinese Official is actually admitting that something happened, saying though that less than 20 people were killed.

As with regime friends of China, the Chinese have blamed the incident on a “few instigators”.

Pajamas Media has a terrific roundup of blogger reactions.