“He died because he was trying to make a difference, and being a soldier was what was making a difference in this time of life. 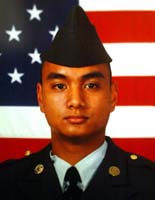 You know, I wanted him to go to college first. But he signed up without me knowing. He was a very strong-willed person. I admired him.”

Jose Navarro,
Peter Navarro’s father
at the funeral of his son
December 23, 2005

Army Spc. Peter Navarro long ago made peace with the brutal reality of war. On Friday, his friends and family were forced to make peace with it, laying him to rest among a sea of white tombstones at Jefferson Barracks National Cemetery.

Navarro, 20, was killed Dec. 13 outside Baghdad in Iraq. The Wildwood resident was among a group of soldiers killed by an explosion while on patrol.

On Friday, the Army presented to Navarro’s parents three medals for their son: the Good Conduct Medal, the Purple Heart and the Bronze Star. The commendations only confirmed what the couple already knew – that their son died a hero.

Army Spc. Peter Navarro died a hero but that didn’t stop some hateful nuts from protesting his funeral.

On Friday, December 23, 2005, when Specialist Navarro was laid to rest, hate-filled protesters from the Westboro Baptist Church in Topeka Kansas showed up to picket. 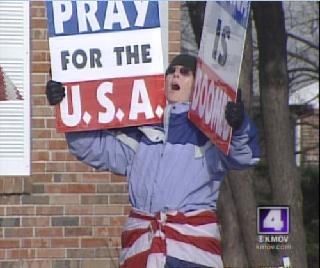 A protestor from the Westboro Baptist Church in Topeka, Kansas outside the funeral service of fallen soldier Peter Navarro of Wildwood. (KMOV)

The Westboro Baptist Church showed up to picket the funeral of St. Louis hero, Army Spc. Peter Navarro because “The government is tolerant of homosexuals!”

On Friday morning they chose the funeral of Army Specialist Peter Navarro to make their message heard.

Some of their signs are too graphic to be shown on television, but their point is simple. They say U. S. soldiers are being killed in Iraq because the government is tolerant of homosexuals.

A counter protest staged by a veterans group and other religious leaders shielded the funeral procession so the signs would not offend them. 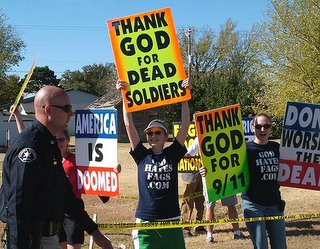 Phelps protestors display their hate speech outside of the funeral of a fallen soldier in South Haven, Kansas in an earlier protest in November. (CJ Online)

When the Phelps gang tried to protest a soldiers funeral in South Haven, Kansas they were met by a group of veteran bikers who held their own larger and louder counter protest:

The peculiar Phelps logic has shifted the pickets from funerals of AIDS sufferers to funerals of Americans killed in Iraq or Afghanistan.

Phelps’ church says the deaths are the penance of a nation too accommodating of homosexuality or, alternatively, that the deaths of U.S. servicemen and woman are divine retaliation for a small bomb that caused about $1,800 damage in 1995 outside the Topeka home of one of Phelps’ daughters.

Legislators in two states are pushing laws to bar protests at funerals. At least one Tennessee county has adopted a resolution to keep picketers away from mourners.

That has triggered warnings of a First Amendment showdown. While Phelps family’s message strikes many people as offensive (one of their signs reads “Thank God For Dead Soldiers”), it is decidedly political.

And, so at one soldier’s funeral in Kansas the hateful church members were met by a group of counter biker protesters!

The Biker Group is called the Patriot Guard Riders according to Jamie Allman from 97.1 FM radio. They are dedicated to show sincere respect for fallen heroes, their families, and their communities.

Update: (Tuesday AM) This update from an email just made my day!

** Thanks to friend Steve Carter, a biker, for this terrific update! **

On November 2, 2005, in South Haven, Kansas, the hateful Westboro Baptist Church members had gathered to protest at the funeral of Sgt. Evan Parker.

But this wasn’t their day!

Over two hundred Patriot Riders had gathered at the funeral to honor Sgt. Evan Parker!

Before anyone arrived for the funeral service, we formed a blockade, three to four bikers deep, completely obscuring the protesters from view of the high school and the mourners. We held American flags high to block their signs and whenever they would begin their chanting, we would drown them out with our own chants of “USA” and the revving of our engines. They didn’t stand a chance. After a couple of hours, they loaded into their van and were escorted out of town.

The family had asked that those of us, who could, attend the graveside service and join them for food at the Methodist church afterward. It seemed main street was the only paved road, so while the service was going on, Craig and I headed to main street to get away from the dust. We parked at the side of the road, found a shady piece of grass, and lay back and relaxed. I was amazed at how many people drove by, pulled over, and thanked us for coming. One older gentleman, a vet wearing a WWII ball cap, even got out of his car and tried to give me five dollars for dinner. 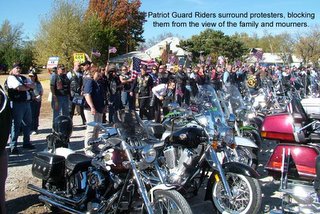 When the funeral service let out, we stood beside our bikes at attention as the hearse and family cars drove past. We mounted up and pulled away from the curb, joining the group of riders heading to the cemetery. The protesters did not show up at the interment and the service was as moving as was to be expected.

Update: (Wednesday PM) Flownover Blog sends word that St. Joseph, Missouri has outlawed the funeral protests and now the Westboro Baptist Church intends to picket the city of St. Joseph next week. The church plans to picket City Hall at 11 a.m. next Tuesday, according to a church news release.