Moderate Muslim clerics in about half a million mosques across Bangladesh on Friday preached that suicide bombers are the enemy of Islam. 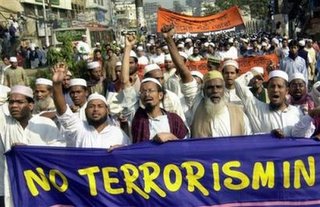 Bangladeshis shout slogans and march through a street during a rally condemning the recent spate of bomb attacks in the country, in Dhaka, Bangladesh, Friday, Dec. 9, 2005. Police questioned eight suspects Friday after a suicide bomber blew himself up on a crowded street, killing himself and six others in the latest attack blamed on extremists wanting to create an Islamic state. (AP Photo/Pavel Rahman)

Moderate Clerics across Bangladesh gave sermons against the recent terror attacks that have left 21 people dead in the last two weeks:

Moderate clerics in about half a million mosques across Bangladesh on Friday addressed worshippers by decrying a wave of bomb attacks carried out by suspected Islamic militants.

“Those who are shedding blood of innocent people in the name of establishing Islamic rule are actually bringing shame on Islam,” said Maulana Obaidul Huq, the Khatib (chief cleric) of Baitul Mukarram mosque, the biggest national mosque at the heart of the capital Dhaka.

Huq told about eight thousand worshippers, gathered at the mosque for sabbatical Jumma prayers, to help the security forces capture the fugitive leaders of the militants.

“Islam prohibits suicide bombings. These bombers are enemies of Islam,” the chief cleric at the Baitul Mukarram national mosque in Dhaka , Obaidul Haq, told worshippers. “It is a duty for all Muslims to stand up against those who are killing people in the name of Islam,” he said. 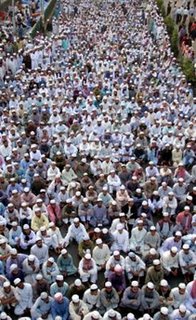 Supporters of the Islami Oikya Jote a small alliance of the ruling Bangladesh Nationalist Party, join a rally protesting against the bomb blasts in the country in Dhaka December 6,2005. Bangladesh has been rattled by a wave of bombings since August 17, blamed on Islamist militants seeking to turn the mainly Muslim democracy into a sharia-based Islamic state. In the past two weeks, suspected Islamists have launched suicide attacks on the country’s judiciary, killing at least 20 people including two judges, three lawyers and three policemen. (REUTERs/Rafiqur Rahman)

The chief cleric says the terrorists are not martyrs, but “will go straight to hell”:

“Islam prohibits suicide bombings. These bombers are enemies of Islam…It is a duty for all Muslims to stand up against those who are killing people in the name of Islam,” he said.

“They will not be martyrs, but will go to hell,” he said, adding “those who are being killed are innocent people, not oppressors. Why then these attacks?”

Huq also called upon clerics in thousands of mosques across the country to mobilise public opnion against terrorism.

Meanwhile, tens of thousands of people took to the streets after prayers against militancy.

Islamic terrorists have left 20 people dead in Bangladesh in the last two weeks:

The Islamist-allied government in Dhaka had long sought to play down the influence of Islamic extremists in the nation of 140 million people and repeatedly denies the presence of the Al-Qaeda terror network.

But a series of blasts since August has killed 23 people plus four suicide bombers, prompting the authorities to invoke a “national crisis”.

Several hundred bombs were planted across Bangladesh in explosions in August. 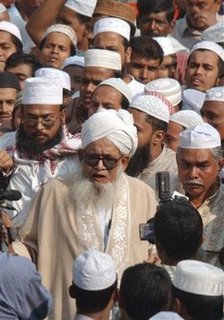 Maulana Obaidul Haq, chief Imam of the National Mosque Baitul Mukarram, center, leads a march protesting against a series of bomb blasts in the country in Dhaka, Bangladesh, Friday, Dec. 9, 2005. Police questioned eight suspects Friday after a suicide bomber blew himself up on a crowded street, killing himself and six others in the latest attack blamed on extremists wanting to create an Islamic state. (AP Photo/Pavel Rahman)

A suicide bomber on a bicycle blew himself up on a crowded street Thursday, killing six others and wounding dozens in the latest attack authorities blame on extremists who want to create an Islamic state in Bangladesh.

Among the wounded was another bomber police said failed to detonate his explosives.

Hundreds of people had gathered on a narrow street in the northern town of Netrokona after police safely detonated another bomb found in a building, when the suicide blast sent shrapnel ripping through the air.