EVO MORALES IS ELECTED IN BOLIVIA AND SAYS HE WILL LEGALIZE COCA FARMING,
VIDEO HERE

“Shades of Che” in Bolivia 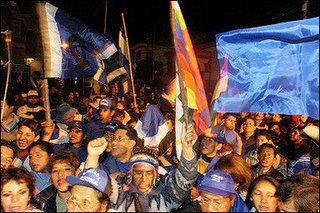 Supporters of Evo Morales of the Movement Towards Socialism (MAS) celebrate holding flags in La Paz. Morales has claimed a decisive victory in Bolivia’s presidential election and is virtually assured a spot in history as the country’s first indigenous head of state.(AFP/Rodrigo Buendia)
-Note the Marxist Che Guevara Flag at the Rally

The new President of Bolivia, Evo Morales, vowed to legalize coca growing in the third largest cocaine producing country in South America behind Columbia and Peru:

Evo Morales, who won Bolivia’s presidential election on vows to end a U.S. campaign against coca growing, stepped up his criticism of American anti-drug policies on Monday, accusing Washington of using drug fighting efforts to militarize the region.

In his first news conference since claiming victory on Sunday Morales — who took a surprisingly strong majority and will be Bolivia’s first Indian leader — insisted he was opposed to drugs but disputed Washington’s methods.

“The fight against drug trafficking is a false pretext for the United States to install military bases and we’re not in agreement,” he told reporters.

“We support an effective fight against drugs. Neither cocaine or drug trafficking are part of the Bolivian culture,” he said in his stronghold of Cochabamba as the first official results from Sunday’s vote trickled in.

Washington considers Morales, who first rose to power as the leader of the country’s coca leaf farmers, an enemy in its anti-drug fight in Bolivia, the third biggest cocaine producer after Colombia and Peru.

The US has concerns, of course, about the legalization of coca growing in the Andean Region where Morales, a former coca grower himself, says that it has medicinal and other “non’-narcotic” uses:

“This is the major U.S. concern about Morales,” said Jeff Vogt, senior associate for rights and development with the liberal think tank the Washington Office on Latin America. The United States “has been engaged in the drug war in the Andean region for more than a decade, with poor results to show for it, but still, we don’t want to see a country in the middle of the region producing all this coca.”

A. M. Mora y Leon at Publius Pundit has a thorough roundup of yesterday’s election.

Venezuelan President Hugo Chavez was the first to call and congratulate his socialist friend, Morales.

Morales said that with his victory “a new history of Bolivia begins”.
Crack dealers, rejoice!