After the tsunami last year, Baby 81 was caught in a desperate custody battle with 9 sets of parents.

The boy was put under police guard after Jeyarajah was arrested and briefly detained for trying to forcibly take him from nurses. “I am so happy, and I only have to thank God for giving my child back,” the boy’s father told The Associated Press. The boy was known as “Baby 81” since he was the 81st patient admitted that day to the Kalmunai Hospital until his identity was confirmed.

The reunited family of Baby 81 was invited to be on “Good Morning America” to tell their heart warming story. But, things didn’t end up so nice for the family after the show. 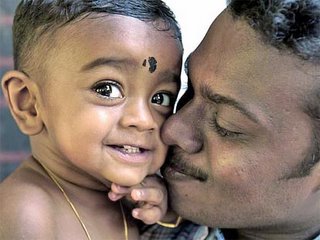 One-year-old tsunami survivor Abilass Jeyarajah, also known as “Baby 81”, plays with his father Murugupillai Jeyarajah in Cheddipalaiyam village in Batticaloa, eastern Sri Lanka in this file photo. Nearly 10 months after he was found among debris to become a beacon of hope and tsunami-devastated Sri Lanka’s best-known survivor, “Baby 81” celebrated his first birthday on Wednesday with a trip to a Hindu temple. (Hindustan)

But, Baby 81’s parents say the media attention actually hurt them this year. And, they describe treatment from “Good Morning America” that is absolutely appalling!

The “heart-wrenching” story earned the parents a visit to New York and an appearance on the “Good Morning America” program of the US TV network ABC.

“We thought we could stay on in America, but in less than two weeks after our TV show in March we were asked to return,” Jeyarajah told AFP in a telephone interview from his temporary home in the island’s east.

“They (TV network) did not give us any money. All we got was 25,000 rupees (250 dollars) the Sri Lankans in New York collected and gave us. Abilash got a lot of soft toys. Thats all.”

He said he regretted going to New York because after his return many villagers as well as local and foreign charities operating in his home area ignored them for tsunami aid believing they had got help from the US.

“I thought going to America would be a turning point in my life, but what has happened is that because of our American trip I have lost other sources of help.

“I don’t get the help the others (in my village) get. So I regret my trip to America. All I got was publicity and nothing else.”

He said he and his wife, Junita, 26, were “thoroughly frustrated” when they were told to go back to Sri Lanka where they had no home, no job and no prospects of earning a living while bringing up Abilash.

“Good Morning America” gave them $250 and a ticket home, and not even a lousy T-shirt!

Jim Hoft
Jim Hoft is the founder of The Gateway Pundit, one of the top conservative news outlets in America. Jim was awarded the Reed Irvine Accuracy in Media Award in 2013 and is the proud recipient of the Breitbart Award for Excellence in Online Journalism from the Americans for Prosperity Foundation in May 2016.
Eagles Wide Receiver DeSean Jackson Says He Doesn't Hate Jews After Posting Anti-Semitic Quotes Attributed to Adolf Hitler
UN Says United States Broke the Law by Drone Bombing Notorious Iranian Terror Leader Qassem Soleimani
EPIC TUCKER CARLSON: Can the Left Lead a Country they Hate? (VIDEO)
Washington Post Says Washington and Lee University MUST CHANGE ITS NAME because Washington "Perpetrated Racial Terror" -- So What About the Washington Post?
BLM Activist Says She Got Her Molotov Cocktail from a Black Man But Investigators Discover It Came from Her White Buddy in Upstate New York
See more...