GENERAL PETER PACE, CHAIRMAN OF THE JOINT CHIEFS OF STAFF, SAYS, “FAILURE IS NOT AN OPTION IN IRAQ”,
VIDEO HERE 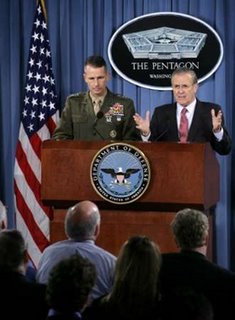 U.S. Secretary of Defense Donald Rumsfeld (R) speaks at a joint news conference with General Peter Pace, Chariman of the Joint Chiefs of Staff, at the Pentagon in Washington November 29, 2005. (REUTERS/Yuri Gripas)

General Peter Pace, Chariman of the Joint Chiefs of Staff, says that the military must also do a better job of explaining progress in Iraq:

The chairman of the Joint Chiefs of Staff on Thursday urged defense personnel, civilian and military alike, to step forward to explain to the American people President Bush’s strategy to achieve victory in his war on terrorism.

Marine Gen. Peter Pace spoke to students at the National Defense University at Fort McNair to “punctuate” the publication Wednesday of Bush’s “National Strategy for Victory in Iraq,” a document that underscored the president’s commitment to “stay the course” in that Middle Eastern country. (Full story)

“We cannot say, ‘We win and get on to the next event,'” he said. “We can say, ‘We are winning, and we will stay at it because our children and grandchildren deserve to live in the kinds of freedom you and I have enjoyed all our lives.'”

He cited progress in all three main areas of Iraq — political, economic and security — noting the upcoming election, increasing business opportunities and nearly 300,000 Iraqis who have had some security force training.

He also directed part of his speech to democrats:

Terrorists have laid out a plan for global domination in 100 years, he said, although he did not specify the origins of that information.

“Their goal is to destroy our way of life,” he said. “No equivocation on their part. They’re not saying if you stay home we won’t come after you.”

Iraq has seen significant success in all areas as USAID reports, but the information is not getting out to the public. Let’s be honest, it would be easier to get the good news out if the media were not so against the War and Administration. Most of the media reports about this speech today concentrated on the rare case of military abuse (AP). So, sadly, the General is right on with making it everyone’s responsibility to communicate the success stories coming from Iraq. And, hopefully the Administration will continue to drive home the great strides our men and women along with the Iraqi people and other allies are making there to improve the lives of this tortured people.