The vote was already held on House Resolution 612 early this afternoon so there will be no Friday Night Fights like last month!

The Representatives were asked to vote on their commitment to achieving success in Iraq.

The vote was held and passed 279-109. Pajamas Media is carrying the story.

Representative Murtha who says he does not see success in Iraq (see vote from yesterday) sent out an email to democratic supporters. Murtha says he has a complete plan on getting troops out of harms way, including relocating troops to Okinawa, Japan to fight the War on Terror!

Murtha also spoke out strongly against the Conflict in Somalia back in 1993 so this is nothing new for him.

But today’s debate did not include another marine’s message to Rep. Jean Schmidt. 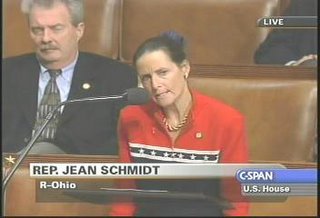 So there was not much to the rematch of the famous November brawl. (picture from Political Teen)

REPRESENTATIVE JEAN SCHMIDT’S TOUGH TALK ON IRAQ PUT HER IN THE MEDIA’S DOGHOUSE. BUT REPRESENTATIVE SCHMIDT IS NO PUSHOVER EVEN IN TOUGH (BIASED) INTERVIEWS!
VIDEO HERE

* “Both of us agreed (Rep. Danny Bupt)that we need to be in Iraq fighting for their freedom and securing ours.”

* “It’s unfortunate that the national media don’t want to talk about this war and want to use me in any way as a scapegoat.” (This is after interviewer calls her “the butt of a joke!”) “They want to deflect on the fact that all but three in Congress voted to stayin Iraq and finish the job.”

* “The Democrats wanted to go out and say that we need to pull out immediately. They never thought we’d put it to a test. That we’d put it to a vote. But we did and all but three people said No! Stay and finish the job.”

* “If I am a scapegoat, so be it. I’m a strong person. But, bottom line, we’ve got people over there. Men and women, Americans are fighting to secure our future, Fighting to give the Iraqi citizens a chance for democracy and they’re dodging bullets. If I have to take a few unkind words… So be it!”

If you appreciated Rep. Schmidt standing up for our troops in the field you can help her by making a donation to her campaign.

You can contribute to Representative Jean Schmidt HERE.

The vote last month held democrats accountable to committing to keep troops in Iraq and not to “Cut and Run” on Iraq.

But, the democrat’s ‘cut and run’ talk again has escalated over the last month. Even with the great success of yesterday’s election, democratic House members led by Anti-War Representative Murtha continue to dominate the news with ‘cut and run’ talk.

Also, today there is a bizarre story on democrat congruity at the Washington Post…

Here is a breakdown on that vote for House Resoution 612.

“Expressing the commitment of the House of Representatives to achieving victory in Iraq”.